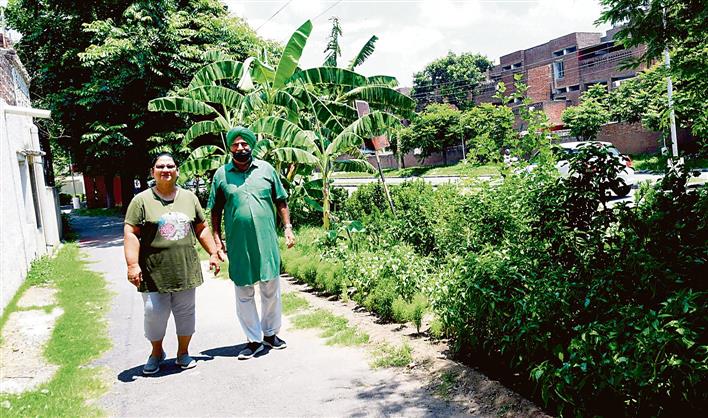 A retired schoolteacher, popularly known as ‘Prof Bathh’ in the area, spends his mornings nurturing plants and evenings teaching kids from the economically weaker section for free.

A resident of Sector 45-C, Joginder Singh Bathh (67), has converted a vacant area used as “mini garbage dump” near the cycle track on the road separating Sectors 45 and 46 into a garden of medicinal plants.

How it all started

“I was caught up with health issues. I was thinking why it happened to me. Then I decided to go into the lap of nature. I started planting saplings in the back lane of houses where some people dumped kitchen waste or took their pets for nature’s call. I cleaned the area and converted it into a green space. It helped me recover from depression,” said Joginder Singh Bathh.

Bathh started teaching poor students for free after he retired in 2013 as a mathematics teacher from Sacred Heart Convent School, Sector 26. Two months after his retirement, he was caught up with health issues and slipped into depression.

“I was thinking why it happened to me. Then I decided to go into the lap of nature. I started planting saplings in the back lane of houses where earlier some people dumped kitchen waste, debris or took their pets for nature’s call. I cleaned the area and converted it into a green space. It helped me recover from depression,” he shared.

“It was very challenging, but I continued. I started off with four or five ornamental plants. However, later I grew medicinal plants such as neem, giloy, ashwagandha, tulsi, green tea and lemon grass. Now, I have planted the saplings of pomegranate, papaya, banana and guava,” Bathh told Chandigarh Tribune.

He did not want to grow vegetables for self-consumption, but wanted to help local residents by growing medicinal and fruit plants. “Medicinal plants not only helped me, but other people also in warding off several diseases,” he quipped.

Since the area is adjoining to the main road, he has also planted bougainvillaea. “It absolves air and noise pollution,” said Bathh, who has grown a total of 50-60 plants in the back lane of 10-12 houses. He teaches poor kids from 4 pm to 6 pm. Children fondly call him ‘Bathh Sir.’

The senior citizen is continuing all this despite the fact he underwent a hip joint operation in 2013 and a surgery to remove one of his kidneys, which had developed a tumour, in 2019. “People’s complements and my wife Gurbir Bathh’s support keeps me going,” he smiled.