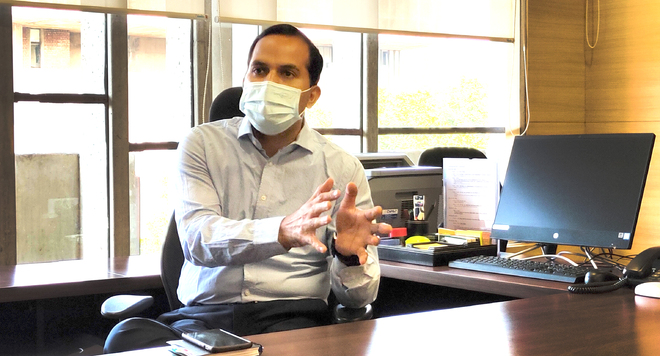 Justifying the hike in water tariff and promising to make the city pothole-free by May next year, MC Commissioner KK Yadav claims to have established accountability of the MC staff towards the city. Yadav, who has been criticised by the ruling BJP, spoke to Chandigarh Tribune.

Q. The bad condition of roads has remained an issue during your tenure. Why couldn’t these be improved?

Recarpeting of roads was pending since 2016 and financial constraint was the main reason. The MC needs around Rs50 crore to recarpet around 350-km road every year. We had recently allotted recarpeting work worth Rs33 crore, while work worth Rs35 crore will be started in the coming month. By May next year, all roads in the city will be pothole-free. We have collaborated with the National Institute of Technical Teachers Training and Research (NITTTR), Sector 26, that has designed all roads due to which the life span of these will increase from the present five years to eight.

Q. What is MC doing to tackle the stray dog menace?

We have just started a dog sterilisation drive, which will solve the problem to a large extent. Additionally, construction of an animal birth-control centre in Raipur Kalan is nearing completion.

Q. What is the progress in terms of dark spots?

We have lit up 80 per cent of the dark spots, while the remaining 20 per cent will be lit up by November.

Q. Chandigarh has failed to make it to the top 10 cleanest cities in the country for the second year in a row. What according to you is lacking or stopping the city from figuring among the cleanest cities?

Q. The hike in water tariff has become a major issue with RWAs and political parties opposing it tooth and nail. Do you feel the hike is justified?

We are giving 11-hour daily water supply in the city, which comes at a cost of Rs203 crore annually, while our revenue through the water bills is only Rs75 crore. To meet the deficit, the water tariff was hiked after inviting public objections, which will help the MC generate a revenue of around Rs150 crore. Moreover, the slabs in Chandigarh are the lowest across the country. Only 22 per cent users will fall in the fourth slab of the tariff, which has increased three-fold.

Q. How did you tackle fund crunch?

We emphasised on the GIS (geographic information system) mapping of properties that has helped the MC increase the income from property tax from the previous Rs22 crore per year to about Rs60 crore. The increase in water tariff will further help us narrow the deficit.

Q. You have introduced GPS watches for the field staff, but there are protests against the move. How do you see this?

Q. The ruling BJP is up in arms against you and alleges that you are against development in the city. What do you have to say on this?

As the Commissioner, I perform my duties within the limits of the Municipal Corporation Act. It is my duty to ensure that the MC is run as per this Act, and if something goes wrong, I am responsible for that.

Q. It’s been almost two and a half years for you as the MC Commissioner. What do you feel are your achievements?

Bringing 28 e-governance services online, of which 11 have already been introduced. This will make the services time bound and transparent. Moreover, it increases our accountability towards citizens. Besides, introducing a call centre (helpline) for people to air their grievances and redressal of their issues in a stipulated time frame is another achievement.