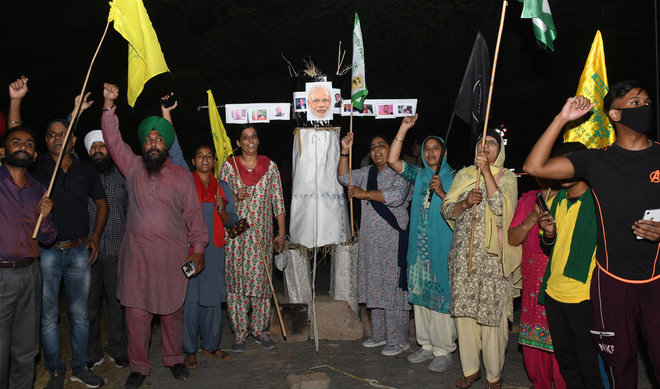 Farm activists hold a protest near an effigy of Prime Minister Narendra Modi at the Sector 45/46 light point in Chandigarh on Saturday. Tribune photo: Vicky

Farm activists from villages and the city came together to raise their voice against the three farm laws and the recent Lakhimpur Kheri violence. The effigies were burnt at various locations in the city, including Matka Chowk, Sector 45 and 46 traffic lights, Sector 36 and 37 traffic lights and Khuda Ali Sher.

“We didn’t want to burn the effigies of ministers and corporate leaders on the day of Dasehra so as to avoid hurting anyone’s religious sentiments. As per the call of the Samyukt Kisan Morcha, we are burning the effigies to register a protest. It’s also a symbol of protest against the Lakhimpur incident. We want Mishra to resign,” said Satnam Singh Tanda, member of Kisan Ekta, Chandigarh.