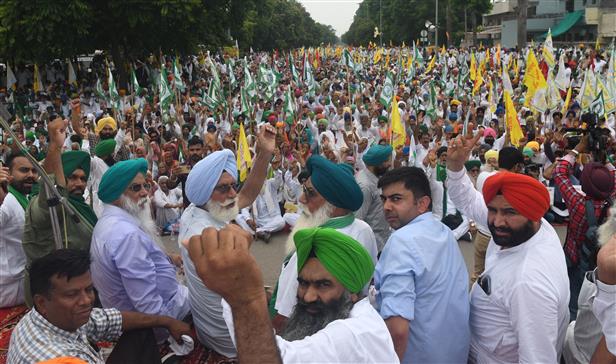 A large number of members of five farmers’ unions today staged a protest against the Punjab Government and the Centre at Shaheed Lt Col Bikramjit Singh (Shaurya Chakra) Chowk, earlier known as the YPS chowk.

Led by Balbir Singh Rajewal, the protesting farmers submitted a memorandum to the Mohali SDM as well as to the OSD to Punjab Chief Minister which included their three main demands.

Rajewal said, “The Punjab Government is duty-bound to provide canal water to the farmers, for which desilting of the canals should begin. The farmers should be given compensation for damage caused to their crops by the unseasonal rain and flooding. New avenues should be found to provide employment to the youth of the state.

“Punjab domicile and the mandatory clearance of Punjabi in matriculation should be enforced for government jobs in the state. We have given a one-month notice to them. If they do not inform us of the steps taken, we will intensify the agitation.”