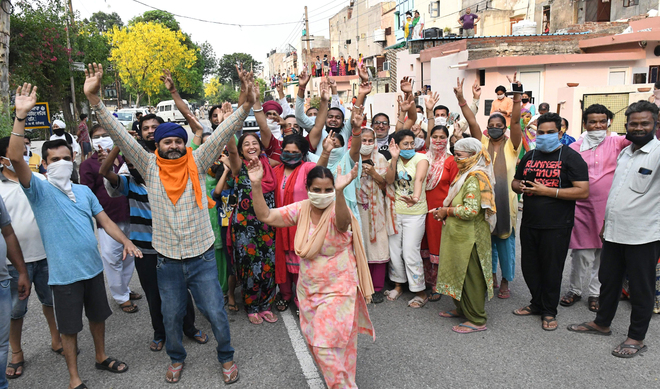 Sector 30-B residents celebrate after the announcement on Friday. Tribune photo: Manoj Mahajan

The UT Administration today removed the containment zone tag from Sector 30-B EWS Colony, bringing relief to residents of the area.

UT Administrator VP Singh Badnore decided to remove the restrictions on the recommendations of the affected area committee. However, he directed the Health Department to continue regular screening and surveillance in the area.

An elderly woman from the locality had tested positive for Covid-19 after her death on Monday.

UT Adviser Manoj Parida said as a matter of caution, families in close proximity to the house of the deceased (all floors in three houses with nearly 31 persons) should be shifted to institutional quarantine centres at the earliest and their houses should be sanitised and kept out of human contact till the time the shifted families were allowed to come back.

Meanwhile, residents of Sector 30-B EWS Colony thanked the Administrator for ridding the sector of the containment zone.

Area councillor Devinder Singh Babla said the residents got the much-awaited relief as the sector was unsealed after nearly 50 days.

He said the residents of the sector went through difficult times. Their condition became miserable with a number of them having been rendered unemployed. Elderly people became sick and most residents were frustrated, he said.

Babla requested the Administration to compensate people of Sector 30. Nearly 595 houses were affected after the colony was declared a containment zone.