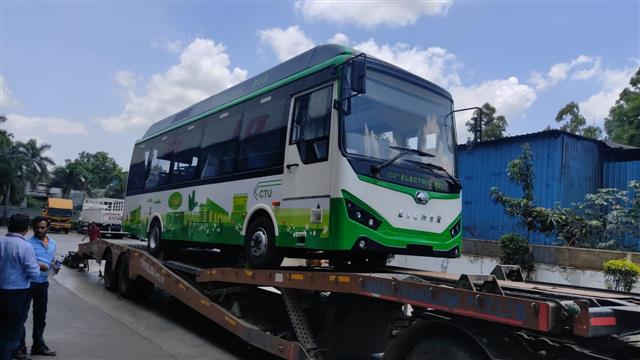 To give a push to eco-friendly mobility for city residents, the UT Transport Department has added five more electric buses to its existing fleet of 40 green buses.

To give a push to eco-friendly mobility for city residents, the UT Transport Department has added five more electric buses to its existing fleet of 40 green buses.

The UT Administration had signed an agreement with M/s Volvo Eicher to run 40 electric buses in the city on a kilometre scheme basis.

Pradhuman Singh, Director, Transport Department, said five buses in the second lot had reached the city, while the remaining 35 buses would arrive before month-end. In September 2020, the Centre had sanctioned 80 electric buses for the UT under Phase II of the Faster Adoption and Manufacturing of (Hybrid &) Electric Vehicles in India (FAME India) Scheme.

In the first lot, the UT had received 40 electric buses last year. Later, bids were invited for procurement of 40 more buses in the second lot. Under the scheme, the maximum subsidy of Rs 45 lakh per bus is granted by the Department of Heavy Industries. For the first lot, an agreement was signed with M/s Ashok Leyland amounting to Rs 154.01 crore for 10 years. The buses have been under operation since November 2021.

For the second lot of 40 electric buses, the agreement was signed with M/s Volvo Eicher in February 2022 amounting to Rs 115.44 crore for 10 years.

Pradhuman Singh said Volvo Eicher was awarded the contract to run the buses at the rate of Rs 44.99/km, which was cheaper by Rs 15/km in comparison to the work allotted earlier for the 40 buses in the first lot.

Earlier, the contract to run 40 electric buses was allotted to Ashok Leyland at the rate of Rs 60 per kilometre.

The procurement of buses will give a major boost to the plan of the UT Administration to replace the entire fleet of 358 diesel CTU buses, running on local or suburban routes, with electric ones by 2027-28.

In order to save the environment from vehicular pollution, the department has decided to replace all its local diesel buses operating in the tricity with electric ones in the next five years as part of the Green Mobility Initiative of the Government of India.

The buses will have various features, including pneumatically controlled passenger doors, air conditioning system, mobile charging points for each row of seats, seating capacity of 31 passengers and eight standees, air suspension at the front and rear, a panic button in case of an emergency, passenger information screens at the front, rear, side and inside the “saloon” area, and a fire detection and suppression system.

For the second lot, a prototype was put on a trial run for 20 days last month. During the trial, the bus operated on the Maloya-Mani Majra route via PGI along with other routes connecting the ISBTs of Sectors 17 and 43. The buses will be put under operation for the general public at the earliest.

After being charged, the bus will be able to cover a distance of nearly 130 km and it will take nearly two to two and a half hours to fully charge the bus. Each bus has a seating capacity of 36 and a maximum of 54 persons will be able to travel at a time, and it will run 200-300 km in a day.

A charging station has been set up at Depot No. 3 in Sector 25. The buses have also been fitted with the fire detection and alarm system.

On August 11 last year, then UT Administrator VP Singh Badnore had flagged off the first electric bus to run on a trial basis. The entire fleet of 40 electric buses was put on commercial operations by the end of December last year.