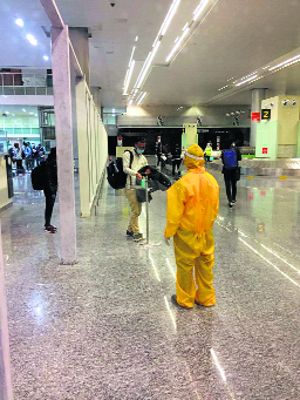 Passengers on their arrival at the Chandigarh international airport in Mohali on Sunday. Tribune photo

The second evacuation flight, under the Vande Bharat Mission of the Union Government to evacuate stranded Indian nationals abroad, carrying 144 passengers from Kiev (Ukraine) via New Delhi, landed at the Chandigarh international airport in the wee hours of today.

Of the 144 passengers on board, 34 belonged to Punjab, two to Chandigarh, 54 to Himachal Pradesh, 53 to Haryana and one to Rajasthan.

Of the 34 passengers from Punjab, five were from Mohali, two each from Amritsar, Fazilka, Hoshiarpur and Gurdaspur, one each from Bathinda, Ferozepur, Faridkot, Moga, Patiala, Ropar and Fatehgarh Sahib, four from Pathankot and 10 from Ludhiana.

Mohali Deputy Commissioner Girish Dayalan said as per the Health Department protocol, all passengers underwent medical screening with strict compliance and nobody was found symptomatic.

He said the passengers hailing from the district would not be sent home as of now. They would be quarantined at various government facilities and hotels for 14 days as a precautionary measure.

Dayalan said the district administration sent passengers from other districts and states to their respective places where they would undergo quarantine.

The Civil Surgeon, Dr Manjit Singh, who led the health team, said during the screening, health officials took utmost precaution and the passengers also maintained social distancing. No passenger was found suffering from fever, cough and cold. All of them were asymptomatic for coronavirus.

Health Department teams deployed at the airport took all precautions while dealing with the passengers. They covered their faces with masks, used hand sanitisers and observed social distancing norms.