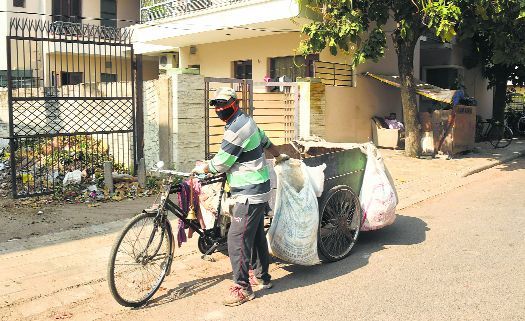 Claiming that people are unhappy with the garbage collection system introduced by the MC, the Federation of Sector Welfare Associations Chandigarh (FOSWAC) said today that the traditional system of collecting waste through rehris was better than the new arrangement.

At an emergency general body meeting held at Sector 21-A park, FOSWAC Chairman Baljinder Singh Bittu said: “Citizens were harassed as garbage piled up in houses and collectors could not earn their daily livelihood for full one-week during the protest. The work of garbage collection had been taken over by the RWAs as the MC could not do its duty. Both the residents as well as the garbage collectors are happy with the rehri system.” General secretary JS Gogia suggested: “The MC should hand over the garbage-collection trucks to the willing RWAs. By doing so, the MC will save crores of rupees and there will be fewer complaints.”

Kamaljit Singh Panchhi, chief adviser, FOSWAC, said: “In Chandigarh, garbage is not being collected properly by the vehicles. People are upset that garbage pickers visit their homes when they have left for duty. Secondly, people living on the upper floors do not get to know that the garbage pickers have come in the area.”

“The residents/RWAs should have been consulted before launching the garbage collection system,” said Dr Jagpal Singh from Sector 35.