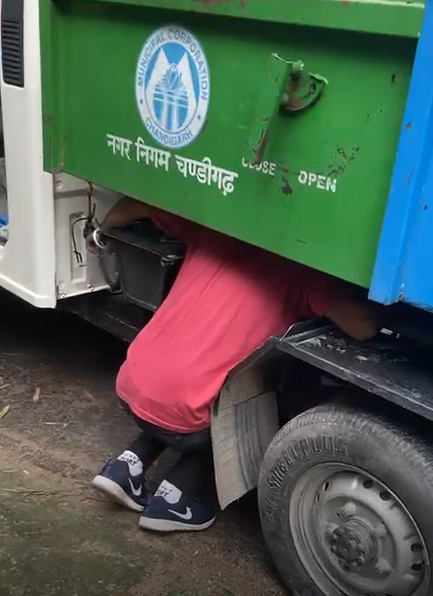 The victim, Navjot Singh, with his neck stuck in the truck.

In a freak accident, the driver of a twin-bin waste-collection vehicle of the Municipal Corporation died after his neck was crushed under its trolley in Sector 23 here today.

The deceased has been identified as Navjot Singh (27), a resident of Kharar who was set to get married in October. The police said Navjot was on duty to collect waste from the Sector 23 and 24 markets. The vehicle’s trolley was lifted as he was trying to fix a fault when it suddenly fell on his neck.

The police were informed about the incident and the victim was rushed to Government Multi-Speciality Hospital in Sector 16 where doctors declared him brought dead.

He is the second outsourced driver attached with garbage-collection vehicles to die in such a way. Earlier, a driver had died in May and the MC is yet to pay compensation to his family.

OP Saini, chairman, Door-to-door Garbage Collectors Society, said the driver died due to the negligence of senior officials of the MC. He said the vehicles engaged for door-to-door garbage collection were not inspected and repaired regularly. The society demanded that his family be given proper compensation, he added.