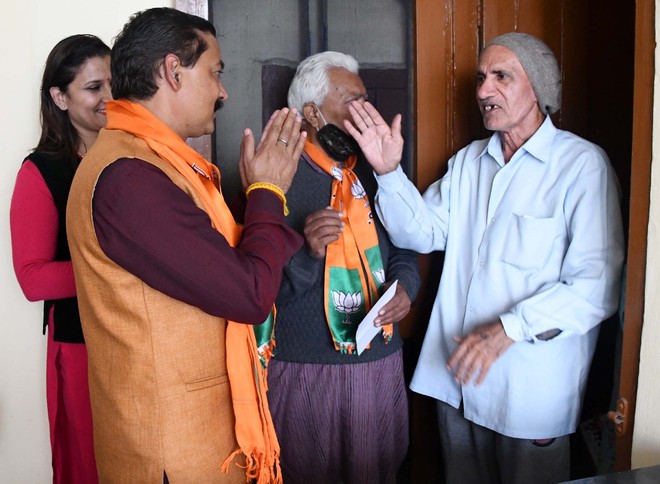 Sitting councillors Shakti Prakash Devshali of the BJP and Hardeep Singh of the SAD are locking horns in Ward Number 30. The two had a good friendly equation and had been favouring each other’s policies till the SAD broke alliance with the BJP over the three farm laws. After the separation of their parties, the two have been questioning each other’s works. “Friendship will be there, but it is a fight of ideologies,” quipped Shakti.

The BJP and the SAD have been fighting the MC poll as alliance partners. However, the alliance broke over the three farm laws. In the 2016 MC poll for 26 wards, the BJP contested on 21 seats. While the BJP won 20 seats, the SAD fought on four and could claim one. This time, the saffron party has fielded candidates from all the 35 wards (seats increased after 13 new villages were merged into the MC). The SAD (19 seats) is fighting in an alliance with the BSP (16 seats).

Hardeep, the lone SAD councillor in the current MC House, said, “Whether our parties are in alliance or are separated, the issues of public will remain like that. The issues of water tariff hike, sanitation, dumping ground and building bylaws had remained unresolved during the BJP tenure, but we will get them resolved.” Firing a salvo at his rival BJP nominee, Hardeep, who is also city SAD president, said, “He is an outsider in our ward. He lives in Sector 29. If he is elected, people will have to go there for even small works such as getting his signature.” Replying to him, Shakti, said, “How small Chandigarh is? And according to his analogy, other than him, everyone is outsider in his ward. We do not believe in ‘insider’ and ‘outsider’ talks. We will talk on development and vision of Prime Minster Narendra Modi.”

The BJP leader also criticised his party’s ex-alliance leader. “For the past 15 years, his (Hardeep) family has been ruling in this ward. People say he is unapproachable and no development has happened during his tenure. We will ensure all works are carried out.” Shakti, who is the sitting councillor from another ward (Sector 29, Industrial Area-I), which has been reserved for a woman candidate now, has been fielded from ward number 30 (Sectors 41, Badheri and Buterla) by the party.