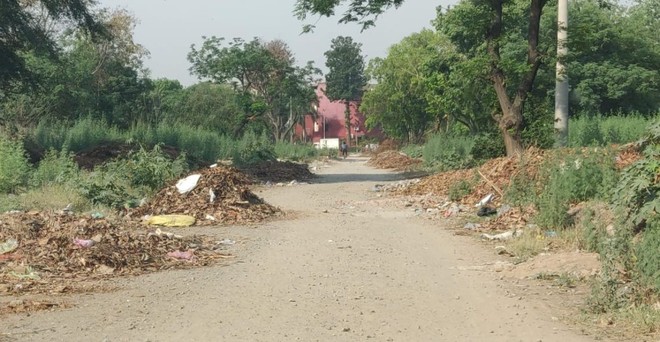 The open area around Sector 38 (West) Sports Complex is gradually turning into a dump yard as private contractors and garbage collectors have been disposing of waste on the site. The waste not only emanates foul smell, but also creates unhygienic conditions in the surroundings of the Sports Complex.

The road leading to Sector 38-39 has also turned into waste dumping ground. Notably, the area has no office and all waste is thrown by construction workers and garbage collectors.

“Initially, we were ignoring dumping of construction debris and garbage. Things are getting worse. With the rise in temperature dumped waste is emanating more foul smell and has become a breeding ground of mosquitoes. We have tried to convince people not to throw waste here, but to no avail. Sometimes, even Municipal Corporation workers throw waste here,” said Anirudh, who often visits Sports Complex.

“The area needs to be beatified. People throw various types of waste here. After some days wild grass will overgrow and the waste will be hidden in the vegetation. They don’t think that stink will remain here for months. Not only sports complex users, but regular walkers too are inconvenienced by the garbage. We have complained about this many times, but no action has been taken so far,” said Parshant R Kumar, a passerby.

“The Sports Complex has been built over more than 2.86 acres at an estimated cost of Rs8 crore. Such scenes of scattered garbage give a worst impression to visitor at the Sports Complex and the general public,” he added.

Though Chandigarh Municipal Corporation officials were unavailable to comment on the issue, sources said the department had been neglecting the area for a while now.

“Due to lack of residential population, the area is ignored all the time. The cleanliness drive is undertaken here once in a month or two. The area near Sports Complex should be cleaned considering the number of young and old people coming here. The situation outside the recently inaugurated Shram Bureau Bhawan (Labour Bureau), located near the Sports Complex, is no different,” the sources in the department added.