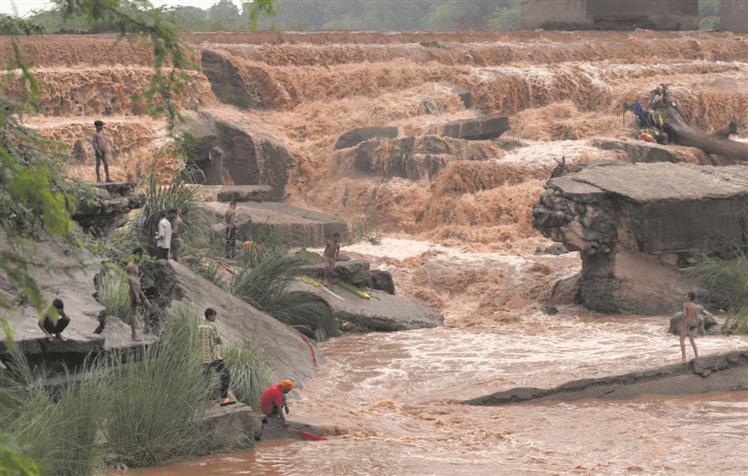 Unaware of the risk involved, children play in the Ghaggar in Panchkula on Wednesday. Tribune photo: Ravi Kumar

The water level of the Ghaggar today touched the 7-foot mark, prompting Mohali Deputy Commissioner Girish Dayalan to review the necessary arrangements in low-lying areas of the river as the weatherman has predicted more rain in the coming days.

Stating that the district administration was on high alert, Dayalan said a 24x7 flood control room was working in the administrative complex to monitor any flood-like situation in the district and evacuation centres with essential items were ready to deal with any eventuality.

Reviewing the flood-control arrangements, he said the district administration would remain fully vigilant to check any untoward incident due to the rain. He also directed officials to strengthen flood-prone sensitive places to minimise damage in the eventuality of a flood.

Dayalan directed the SDM, Dera Bassi, to remain vigilant and sound an alert in downstream areas of the Ghaggar and chalk out an evacuation plan in case of flood.

He also reviewed the arrangements made by various departments to deal with such a situation.