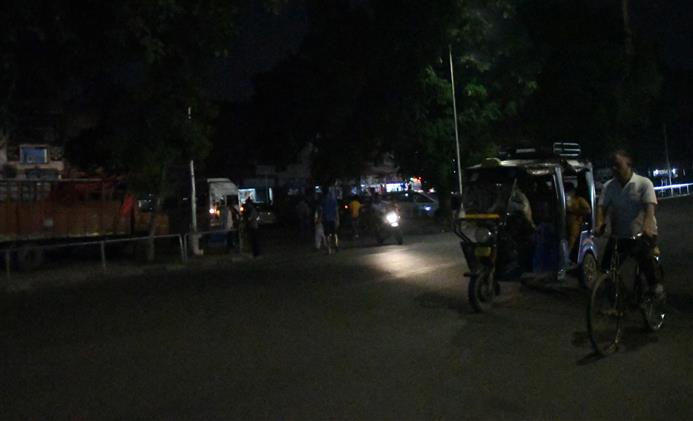 A marketplace enveloped in darkness as large areas of Chandigarh were left without electricity following a snag in transmission lines at Nalagarh, HP, on Wednesday. TRIBUNE PHOTO: MANOJ MAHAJAN

Electricity supply to most parts of the northern sectors of the city remained affected on Wednesday after a fault occurred in the main transmission lines near Nalagarh in Himachal Pradesh.

The administration said supply to several parts of the city had been badly affected and restoration work was being carried out. Several areas faced power cuts of up to eight hours. A Sector 29 resident said the supply to the area was affected around 11 am and was fully restored only around 8 pm. The supply was briefly restored around 5 pm before being snapped again.

CB Ojha, Chief Engineer, UT, said both main transmission lines developed snag near Nalagarh in the morning. A fault occurred in the first line around 10.30 am and subsequently, the second line also developed a snag around 11 am.

He said the faults were being rectified and power was likely to be fully restored by 10 pm, he added.

The fault in one transmission line had been repaired, while work on the second line was still under way, he said.

Anita Kanwar, a resident of Sector 26, said light showers brought some respite from the sultry weather conditions. “But it was challenging to run daily chores without power for most part of the day,” she said.

An industrialist said there was no supply to Industrial Area, Phase II, from 11 am to 5 pm, as a result of which production had to be stopped, causing huge losses.

As the outage took many by surprise, with no prior announcement having been made, calls to the Electricity Department helpline went unanswered, said a Sector 7 resident. A Mani Majra resident said the helpline remained busy. In the absence of power, water supply was also affected in some parts of the city. In many areas, power was restored by noon or evening. Work in many government was also affected. The supply was yet to be fully restored in the city till the filing of the report.

Parts of the city affected

While light showers brought respite from sultry conditions, it was challenging to run daily chores without power for most part of the day — Anita Kanwar, a resident of Sector 26

Snag in two lines at Nalagarh

Both transmission lines developed snag near Nalagarh one after the other at 10.30 am and 11 am. Work is on to fully restore supply — CB Ojha, Chief Engineer, UT