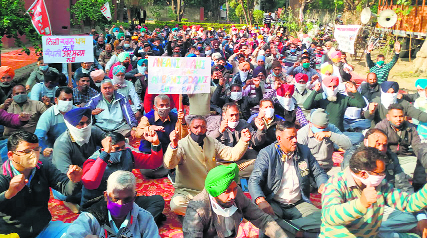 Workers of the UT Power Department hold a protest on Tuesday.

The Punjab and Haryana High Court today applied brakes to the move to privatise the functioning of the electricity wing of the UT Engineering Department.

Taking up a petition filed by the UT Powermen Union, a Division Bench stayed the tendering process regarding privatisation of the wing. A copy of the order was not yet available.

Appearing before the Bench of Justice Jitendra Chauhan and Justice Vivek Puri, senior advocate Sunil Chadha and Akshay Chadha contended on the petitioner’s behalf that the union was aggrieved by the decision to privatise the electricity wing by selling 100 per cent stake of the government in the absence of any provision under Section 131 of the Electricity Act, 2003.

The Bench was also told that the process of privatisation of the wing could not be initiated at all, especially when it was running in profits. The sale of 100 per cent stake was unjust and illegal as the wing was revenue surplus for the past three years. It was economically efficient, having transmission and distribution losses less than the target of 15 per cent fixed by the Ministry of Power.It was also contended that the transfer scheme without calling for objections from all stakeholders could not be legally sustained and acted upon. As per Section 131(2) of the Act, the power could not be transferred to a totally private entity with no stake or control of the government.

“The entire action of the respondents in privatising the electricity wing of the Engineering Department, UT, and the entire process being carried out pursuant thereto, including office memo dated June 10, the decision taken during a meeting of the privatisation of the power department/utilities held on May 12 as far as the UT, Chandigarh, is concerned, the notice inviting bids and the documents prepared in relation thereto, is not only illegal, unjust, arbitrary and unconstitutional, but also in violation of the provisions and the principles of law...,” it was added. —TNS