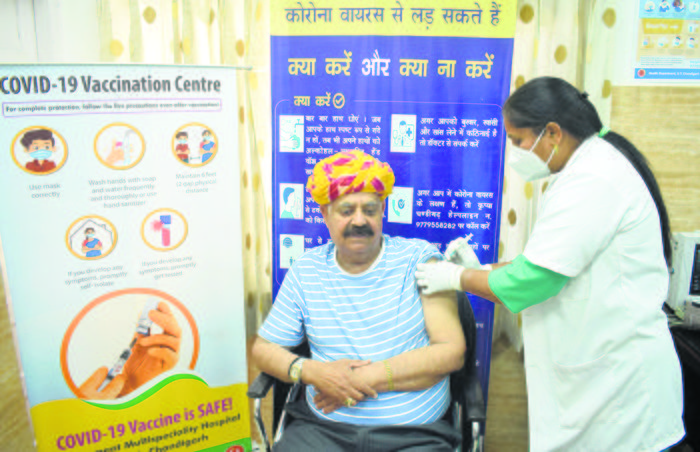 On the first day of the vaccination drive for senior citizens and those aged between 45 and 59 with comorbidities, at least 556 persons turned up at 15 vaccination sites in the city today.

However, the beneficiaries with comorbid conditions were in less number — only 63 — as it took time for the portal to upload the necessary documents. At the GMSH, Sector 16, no beneficiary from this group received the vaccine.

At the Government Medical College and Hospital (GMCH), Sector 32, the vaccination of healthcare workers and frontline workers has picked up pace. “Although there were some hiccups as the new CoWIN 2.0 was rolled out, the process ran smoothly throughout the day. Due to the prevailing rush, the hospital advises willing citizens to be aware that there is a waiting time of 30-60 minutes before getting vaccinated,” read an official statement from the GMCH. 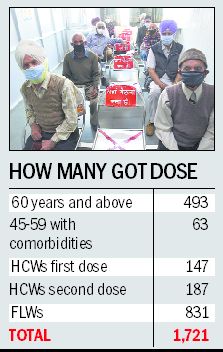 The official statement of the UT Administration also stated that there were a few glitches in the portal, which were duly rectified at the backend and the process got smoother as the day progressed. As it was the first day of the portal launch, the beneficiaries got themselves registered at the vaccination site itself.

Dr Neeraj Kumar, managing director of Chaitanya Hospital, where 96 persons, aged 60 and above, turned up for the vaccination, said: “The first day witnessed a good response as beneficiaries started coming 9 am onwards. Initially, the portal was slow and took time to register the citizens. Another problem was that those who had registered themselves at home were not accepted by the portal. We had to cancel their registration and do it again.”

Punjab Governor and UT Administrator VP Singh Badnore also received the jab. He appealed to the citizens to get vaccinated at the earliest as it was safe and the way to break the Covid transmission chain.

The number of private hospitals will be increased to nine from Tuesday. The government facilities will remain the same as before.