UT to take final call; panel to look into issue of GPS watches 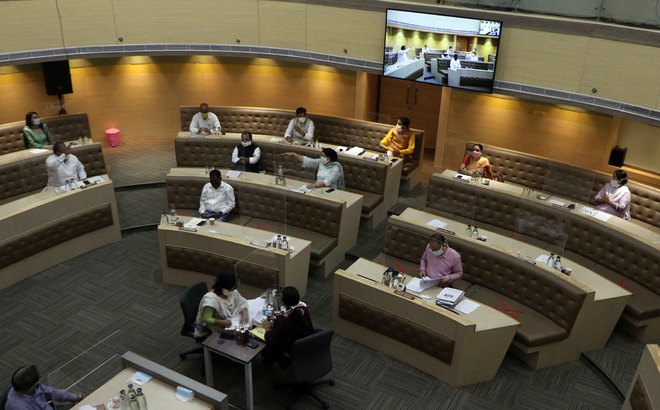 The MC General House today decided to roll back the water tariff hike while putting the two other contentious issues of GPS watches and reduction in the rent of Sector 23 booths on the back burner. The House decided to form committees to look into the two issues.

The House decision on the water tariff hike will now be sent to the UT Administration for the final approval. The three-time increase in the tariff has already been implemented in the city. Meanwhile, Congress councillors staged a walkout over the issue.

Congress councillors demanded that Mayor Raj Bala Malik should resign for alleged failure to deliver on development issues. Malik said, “I will not resign. I was not elected by you. We are 20 and you only five.”

Earlier, politics was at its peak today as both the ruling BJP as well as the opposition Congress tabled agendas regarding the sanitation workers’ demand and the water tariff hike.

The first agenda tabled by the Congress was of its demand for cancellation of a notification on the water supply by-laws. The House rejected the demand and resolved that the Administration notification cannot be cancelled.

BJP councillors asked the UT Administration to open apni mandis. “Even clubs have opened where social distancing is not possible. Then, why not mandis?” asked councillor Arun Sood.

Tempers flared over the issue of 200 per cent increase in water rates.

Congress councillor Devinder Singh Babla and BJP councillor Gurpreet Dhillon had a verbal duel with one of them heard shouting, “Haath lagake toh dikha”. They relented following an intervention of some BJP councillors.

The second agenda of the Congress regarding demands of safaikaramcharis was also set aside with an assurance of “not doing anything wrong” to the sanitation workers. Though Congress councillors tried to make an issue out of GPS watches and water tariff hike, the united BJP councillors made them silent, reminding them that these agendas were okayed in the MC House with their approval.

While the BJP criticised the agendas tabled by the Congress, it raised the same issues in the agendas it tabled during the meeting but with a ‘different language’. The ruling party’s first tabled agenda was to review the decision on GPS watches for MC employees. Councillor Rajesh Kalia spoke about the false location shown by the watches and a huge monthly rent paid by the civic body for these gadgets.

On this, MC Commissioner KK Yadav said they had no specific complaint and there could be a default in technology, but not all devices were faulty.

Later, it was resolved to form a committee to assess its merits and demerits and bring its recommendation before the House.

A commitment made to the Centre that a concrete road will be built in the Sector 38 motor market in 100 days of its second tenure has remained pending. Councillor Arun Sood highlighted the issue during the House meeting. “A list of works, including the Sector 38 road, was sent to the PMO, but the work is still not done,” he said.

No more relief for parking contractors

The House resolved against giving more compensation to the parking lot contractors.

They were earlier given a relaxation in the monthly licence fee. They were also asked to provide all smart features by November 30.

The House resolved that the MC should look for more feasible sites for vendors in the city. Councillors said viable sites should be identified for vendors, as many of them had not shifted to some sites offered to them by the MC as they did not find business there.