India-Australia cricket match: A horrifying experience for many fans : The Tribune India

India-Australia cricket match: A horrifying experience for many fans 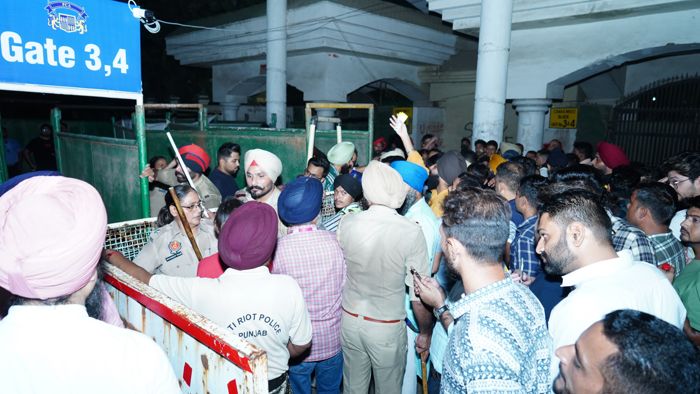 The T20 international match between India and Australia played at IS Bindra PCA Stadium here yesterday was a horrifying experience for many fans, who failed to gain entry to the stadium despite having valid tickets.

As these fans, including women and children, watched people illegally enter the stadium, allegedly with the help of the police personnel deployed there, the mounted police lathicharged them for not properly queuing up. The police action led to a stampede-like situation.

“There were no lights installed near the gates. The police, with the help of outsourced employees, were letting people (without ticket) in. The employees were made to open the gates with their accreditation card’s barcode. People protested this illegal practice and tried to forcibly entry the stadium. This was a very horrifying experience for me. My six-year-old son and wife were also with me,” said Honey Goyal, a spectator.

“The stadium has hosted many matches but such a situation had never been witnessed. The public at gates No. 3-4, 8-9 were affected the most. A large number of people were allowed to gather in a congested space and there were no proper arrangements to control the crowds,” claimed Pulkit, another young fan.

Seat numbers of no use

While many fans were struggling to gain entry to the stadium, those, who were inside, failed to get the allotted seats. “I didn’t understand for what purpose the seat numbers were mentioned on the tickets. The people were asked to sit wherever they wished. Instead of appointing employees at the gates, the Punjab Cricket Association (PCA) could have hired volunteers to ensure that spectators got the allotted seats. There was total chaos at the stands with people sitting all over the entry and exit stairs,” said Anup Mehta, another spectator.

While there was chaos outside, top police officials were busy making arrangements for the VVIPs. "No untoward incident was reported to us. Had it happened, we would have got information on our emergency groups. I was inside the stadium for the security of the VVIPs. The Punjab Chief Minister, the Governor and others were there. Police personnel from other districts were also deployed at the stadium. The SHOs and other staff were deployed on the entry gates and no complaints were received from their end or from any spectator," said Harsimran Bal, DSP (City-II).

The PCA president and the general secretary remained unavailable for comment on the issue. However, in a press note, Gulzarinder Singh Chahal, President, PCA, thanked the local administration and the police for their services.

The police, with the help of employees, were letting people (without ticket) in. The staff were made to open the gates with their accreditation card’s barcode. — Honey Goyal, a spectator