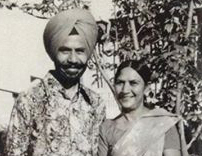 A file photo of Balbir Singh Sr and his wife.

“It’s very sad. We joined the Punjab Sports Department together in 1960 and even my wife (Nirmal Milkha Singh) had worked under him,” Milkha said. “As far as my memory goes, we were part of the Indian contingent during the 1956 Melbourne, 1960 Rome and 1964 Tokyo Olympic Games. Apart from these major events, we were part of the Indian contingent in many Asian Games and other international tournaments.”

However, Balbir was not part of the team in the 1960 and 1964 Olympics, though he may have travelled there on his own.

“Balbir was one of the finest hockey players of India after Major Dhyan Chand,” Milkha said. “His contribution cannot be forgotten in decades to come. It’s so disheartening that his death came when the world is under a lockdown. He deserved a huge farewell. I just wish everyone in this country pays a tribute to the departed soul.”

Balbir Singh Sr and Milkha Singh, two of the greatest sportspersons of India, enjoyed such popularity during their heyday that it is said they did not require an appointment to meet Jawaharlal Nehru, the then Indian Prime Minister. “It is true. We could meet him at a short notice. He loved hockey,” Balbir had once said.

Meanwhile, Hockey Chandigarh secretary Anil Vohra expressed grief on the death of the hockey icon. “He was the lifetime president of Rock Rovers Hockey Club, one of the oldest clubs in Indian hockey. He will remain in our memories and his achievements will be an example to live up to for the coming generations,” said Vohra.