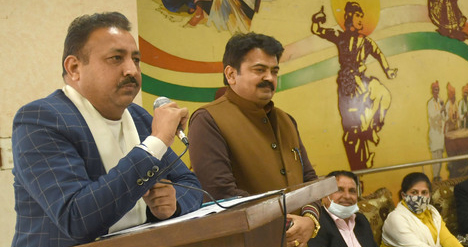 A significant section of Kajehri village was cordoned off here today for securing an event attended by Mayor Ravikant Sharma. While the road dividing Sector 52 and 53 was entirely barricaded, the main parking lot of the village was out of bounds for the general public. The only metalled approach road in the village was off-limits too.

Locals claimed that 50 per cent of the shops were shut down by the police. These roads and shops remained shut from 10 am to 4:45 pm.

While shop owners lost business, regular commuters were harrowed too. One of the meat shop owners, Mohmmad Jameel, said: “I have lost about Rs3,000 worth of earnings. Sale was down. Abruptly, without any prior intimation, our shops were shut down. This should not be done in future.”

Kamal Singh, another shopkeeper, said: “My dhaba has been shut since 10 am. More than half the shops here were shut. Now, we can’t argue with the police if they ask us to shut the shops. I have lost Rs500 dehadi (daily wage).”

Komal Singh, a resident of the village, said: “They are trying to make this city like Kashmir. About 500 cops were deployed today. There was a curfew-like situation.”

When contacted, Ravikant Sharma said: “I wasn’t aware of the police arrangements, but I am sure it was done because of what happened on Saturday in the motor market. People may have threatened to protest.”

10 persons rounded up, let off

Joga Singh of the Pendu Sangharsh Committee said, “Around 10 persons from different points of the village, who wanted to stage a symbolic protest, were rounded up and later let off.” He said: “None of us were allowed to even go near the barricades.” The SHO of the Sector 36 police station said: “Only four-five persons, who had lost their way, were rounded up and then let off.”