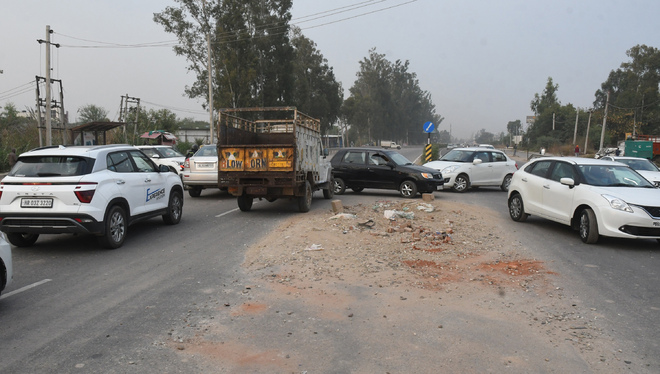 Four persons have lost their lives in the past 15 days on a killer stretch near Nabha Sahib on the Zirakpur-Patiala road.

The Airport light point and Aerocity Chowk are two fast-emerging hotspots where major and minor accidents are a daily affair.

On November 21, two persons were killed and as many injured when a recklessly driven SUV hit a taxi waiting to take a U-turn on the Zirakpur-Patiala road. The SUV driver first hit the police beat box at the intersection and then rammed into the taxi around 1.30 am.

On November 20, Jasmer Singh (65), who was riding a scooter, was killed after being hit by a bus near a petrol pump in Nabha Sahib village early in the morning. The Naraingarh Jhungian resident was going to his daughter’s house in Lohgarh when an unidentified driver of a PRTC bus, coming from Patiala, hit him. The victim fell on the road and succumbed to his head injury on the spot.

On November 8, a 48-year-old autorickshaw driver lost his life around 7.30 pm when he took a U-turn from the traffic lights towards Nabha Sahib and a car coming from the wrong side hit him. He is survived by his wife and two children.

The Zirakpur traffic police have identified 14 such black spots and have written to the authorities for manpower, but they are yet to hear from them.

Locals said the main cause of accidents was speeding and reckless driving. Also, people do not follow traffic rules and a moment of negligence becomes a misery of a lifetime.

“Often people take the wrong side after refuelling at the petrol pump and are run over by vehicles coming in at high speed from the opposite side,” said the owner of a tea stall near the petrol pump.

Another reason for a majority of the accidents is the multiple entry-exit point to residential colonies on the national highway. “In a hurry, localites coming out of residential colonies forget that there is heavy vehicular rush moving at high speed on the national highway,” Zirakpur traffic police incharge Omvir Singh said, adding that “there are multiple black spots in this short stretch. The crossing near the petrol pump has been identified as a black spot.”