Ahead of MC poll, leaders come down heavily on each other 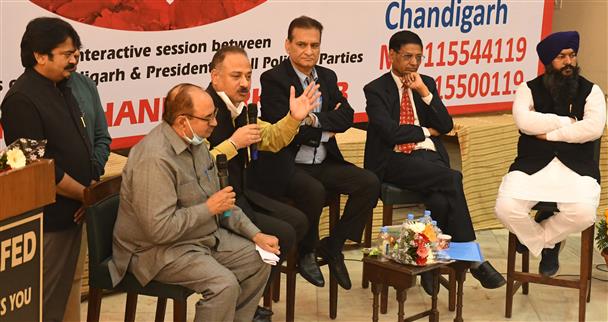 A debate, matdata puchhta hai, organised by CRAWFED, underway in Chandigarh on Sunday. Leaders of the BJP, Congress, AAP and the SAD-BSP took part in it. Photo: Pradeep Tewari

The “matdata puchhta hai” event remained a stormy affair today as political leaders came down heavily at each other. Congress senior vice-president Pawan Sharma and city BJP president Arun Sood had heated arguments over various issues ahead of the December 24 MC poll.

Promising the overall development of the city if his party was voted to power, the Congress leader had a dig at the ruling party.

“We will develop UT villages like urban areas in the city. Sanitation has gone from bad to worse. Cow cess is being charged, but the stray cattle menace is still there. Perhaps, this money is going in the salaries of the staff,” he said.

“The hike in sewerage and water rates will be rationalised and roads recarpeted. We will also get 30 per cent of the total UT’s funds for the MC,” the Congress leader said.

On this, Sood replied, “The Congress gave the work of waste processing plant to Jaypee without floating any tender and signed an MoU without any clause. After a long fight in the National Green Tribunal (NGT) with the firm responsible for the mountain of waste at the Dadu Majra dumping ground, we have started the process of clearing the waste and setting up a new plant.”

“Cow cess is being spent on building a Barsana-like gaushala in Raipur Kalan. Besides, not just the MC’s grant, even its earnings have increased,” he said. Sood was interrupted by Congress leaders who said the latter was giving a speech. The BJP chief, after sharing his views, left the venue. “The Congress leader came late, not me,” he said while leaving.

Later, Prem Garg, convener, AAP, which is fighting the MC poll for the first time, said, “We will ensure transparency and update the contract and agenda-related information on the MC’s website.” AAP has already promised 20,000 litre free water per bill, besides promising to clear all waste dumping sites in the city.

The Congress leader fumed when Garg was “allowed to give a speech rather than just replying to questions.” He even left the stage and started to walk outside, but was later stopped.

Earlier, sharing his party’s vision, city SAD president Hardeep Singh said, “We will raise the issue of one-time settlement with regard to CHB houses. We will provide 24X7 clean water supply. We will get garbage collection charges reduced and resolve parking problems. We will promote Punjabi.”

While the BJP, AAP and SAD presidents shared the stage, city Congress chief Subhash Chawla did not turn up despite a written confirmation to CRAWFED, the organiser, an umbrella body of RWAs. When Chandigarh Tribune contacted Chawla, he said, “An unscheduled meeting with the general secretary in-charge came up at 11 am and I had messaged the organisers on Saturday night that I won’t be able to come to the event. Pawan Verma reached late as he first mistakenly reached the Press Club instead of the the Chandigarh Club, the venue.”