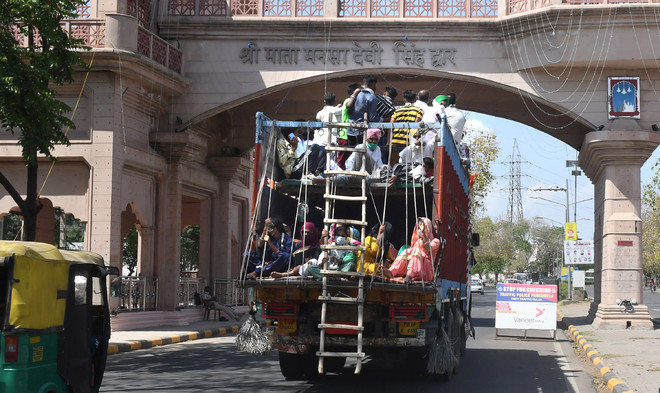 Devotees being ferried to the Mansa Devi temple in violation of the Covid norms in Panchkula on Sunday. RAVI KUMAR

The tricity today witnessed a record high of 1,684 Covid cases since the start of the pandemic and 10 deaths. This month, the tricity has reported 117 deaths and 20,074 cases.

While Mohali witnessed 880 cases, Chandigarh recorded 625 cases, a quantum jump of 45 per cent from the previous day, and Panchkula saw a slight dip in its Covid count with 179 cases.

Despite no increase in tests conducted in the UT today, the positivity rate on a single day increased to 17.6 per cent. With the same rate of tests, around 450 average infections were being reported, which rose to 625. In view of the new Covid strain, experts doubt any respite this month. 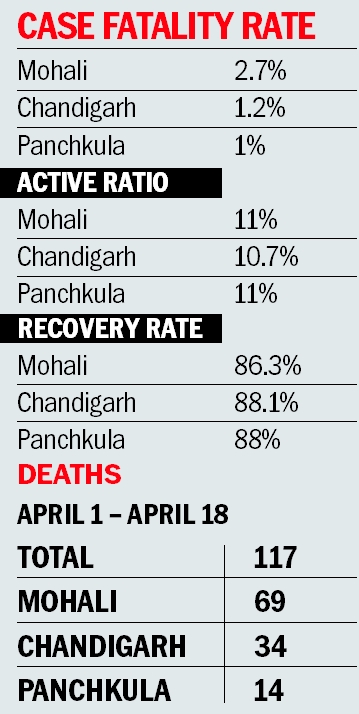 Dr Rajesh Kumar, a former head of the Department of School of Community Medicine, PGI, said: “The peak will be higher this time as a new variant has been found in the region. The virus has almost been replaced with more contagious characteristics. The restrictions imposed by the UT Administration in controlling the spread will show some effect in the next two weeks. When the cases started increasing in mid-March, people did not adhere to the norms. So, the cases rose exponentially in April.”

The fatalities in Mohali also increased to 69 this month. Last month, the district had seen 49 deaths due to Covid. The district has so far logged 9,380 cases this month. A total of 448 patients were cured and three deaths were reported in Mohali today. There are 6,211 active cases and 502 have died so far.

Chandigarh has seen 34 deaths in 18 days of the month, while last month, 27 deaths were reported. The city has seen 6,934 cases in April. The number of active cases rose to 3,625 in Chandigarh. With three more deaths, the toll has reached 413. The total number of cases in the UT has reached 33,934. As many as 411 patients were cured.

With four more deaths in Panchkula, the fatality has reached 168, while 1,976 are active cases in the district.