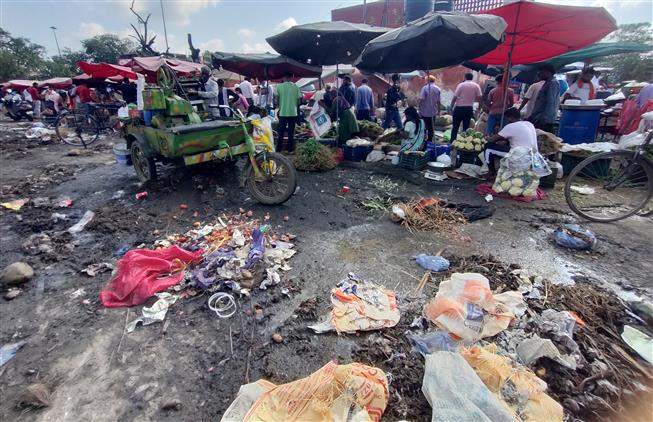 Fetching produce at the Sector 26 grain and vegetable market remains an ordeal for visitors with the area clogged with muddy slush and foul smell emanating from littered garbage.

To make matters worse, traffic jams have become commonplace due to the ongoing work on laying of sewerage, which was started during the ongoing monsoon season.

Shopkeepers say due to the work that started a month ago, the entire market has been dug up, leaving little space for vehicles to move.

Rains have aggravated the woes of visitors as roads have turned into a muddy slush. Dumped rotten vegetable and fruit waste has added to the mess, causing stench.

“Visiting the market these days is an ordeal. It is nearly impossible to drive a car inside due to the poor condition of roads. The authorities should not have dug up the entire market roads. It has spelt chaos. The work should have been done in a phased manner,” says Rita, a housewife.

To manage the chaos, not even a single cop has been deputed. Some of the entry/exit points remain blocked by wrongly parked trucks. “Despite CCTV cameras, traffic cops remain busy challaning offenders. Aren’t they supposed to regulate traffic? A team of traffic cops must be deployed here till the time the work is on,” says Raman Singh, a banker.

A local trader says: “The work got halted a few days ago due to rain. It shouldn’t have been started in the monsoon season in the first place. There is lack of coordination between the UT Administration, MC and police.”

In the absence of garbage bins, random piles of waste can be seen across the market. Even outside the market, garbage is strewn along the road. This, at a time when Swachh Survekshan rankings are set to be announced next month.

Senior Deputy Mayor and area councillor Dalip Sharma says: “The sewerage work started this month as downpour was not expected in September. It will take about two-three months for the work to complete. Unauthorised vendors and truckers are to blame for littering of garbage. I will take up the matter with MC Commissioner. The MC manages only sanitation, the rest is taken care of by the UT Administration.”