SHO hid facts, married me in February in a Gurudwara in Phase-8, Mohali: Woman 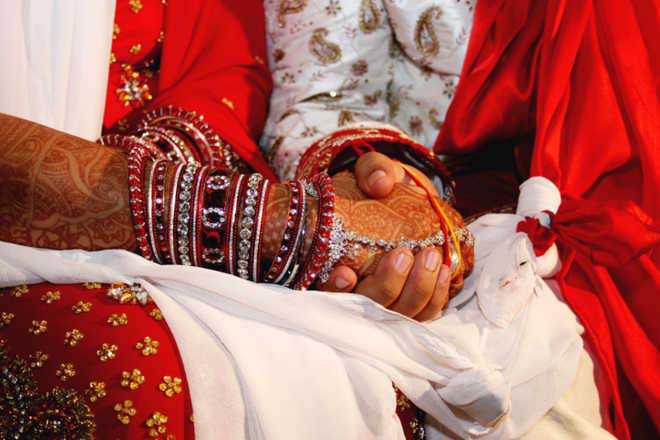 A national award-winning writer from Kharar has alleged inaction regarding her complaint against an Inspector of Punjab Police whom she accused of fraudulently marrying and establishing a sexual relationship with her.

A national award-winning writer from Kharar has alleged inaction regarding her complaint against an Inspector of Punjab Police whom she accused of fraudulently marrying and establishing a sexual relationship with her.

Addressing a press conference, the writer alleged that Gurmit Singh, SHO, Sambhu police station, had married twice before marrying her. She alleged he had gotten a divorce from one marriage but not from the second. He also has one daughter from one of these marriages.

He hid facts from her and married her in February in a Gurudwara in Phase-8, Mohali. He forged signatures of his mother and brother at the time of marriage, she alleged.

The writer further alleged she found Gurmit on a matrimonial site ‘Sangham.com” and informed him that her divorce case was pending in a court, the last date of which was March 24, 2020.

Gurmeet told her that he too was divorced and had a daughter but he gave no information about his second marriage. Her first meeting with Gurmit was on February 15, 2020, in Mohali phase 6.

According to the author, she came to know about him when the Inspector left her after having beaten her on July 9. He never returned home.

"When I called him, he answered the calls abruptly and said he has done this with many women like me and there is no need to follow him from today onwards. He threatened that he was a police officer and could do anything to her, " she alleged adding he asked her what proof she had of their marriage.

According to the author, she has illicit chats of Gurmit Singh with other women and girls on Facebook. The main interest of his chats was tricking and luring the girls and women into marrying him.

The writer, through her lawyer Lalit Sood, has lodged a written complaint against him with IG Ropar seeking registration of a case of fraud and rape against him. Her lawyer said the Hindi author has won Rajiv Gandhi and Bhaskar Pride national awards. She has written 11 books.

Meanwhile, when Chandigarh Tribune contacted the Inspector, he denied the allegations. "Whatever I have to say, I will before the authorities," he said.