NDRF effort to save puppies goes in vain : The Tribune India 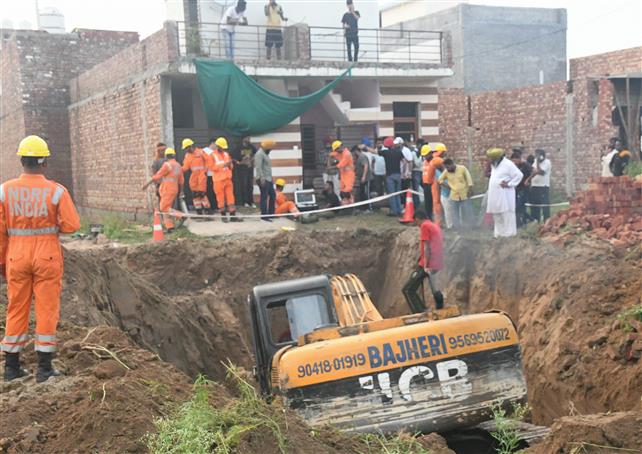 A team of the NDRF tries to rescue three puppies from a borewell at Sarpanch Colony, Kharar, on Saturday. Their effort went in vain as the canines were killed after earth caved in. photo: Vicky

A six-hour long NDRF operation to save three puppies, which fell in a borewell at Bhagomajra, ended unsuccessfully as a big chunk of earth fell on the canines.

The puppies had fallen in about 50-ft borewell on Friday evening. A 21-member NDRF team was summoned to the residential area after efforts being made to rescue them failed.

NDRF officials said the two pups were showing movement earlier while one was immobile. Oxygen supply, food and milk were being provided to them, the officials added.

Area residents said the three puppies fell in the 40 to 50-ft-deep pit outside a house in Sarpanch Colony last evening. A fire tender was called, but it failed to rescue the canines.

A local NGO, Rabb De Jeev, raised the issue with animal rights activist Maneka Gandhi, who reportedly had a word with the Kharar SDM following which a rescue operation was launched.

Minakshi Malik, who runs the NGO, said, “We were trying since yesterday evening, but finally the NDRF team had to be called to save the puppies.”

A JCB machine even dug up a 20-ft pit near a house in the middle of a residential colony to take out the pups.

However, the pups could not be saved as a big chunk of earth fell on them directly, burying them around 9:30 pm today.