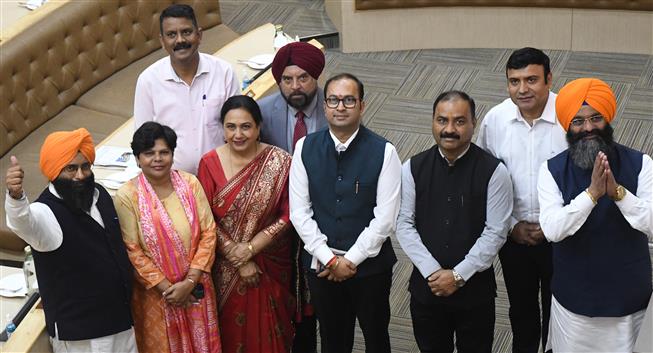 Their appointment is illegal. It is a murder of democracy. They should be experts in various fields, not BJP sympathisers — Prem Lata, AAP Councillor

Both AAP as well Congress councillors boycotted the ceremony, alleging the nominated councillors had association with the ruling BJP.

Later, when the House meeting started, the Opposition councillors halted their protest. Some AAP councillors had heated arguments with BJP members as well as with the nominated ones.

Attacking the nominated councillors during the meeting, AAP’s Prem Lata said: “Their appointment is illegal and they are from the BJP. It is a murder of democracy.”

“Only those having expertise in different fields should have been nominated. They should not be BJP leaders or sympathisers,” said the AAP councillor. She along with other party councillors marched to the well of the House in protest. Nominated councillors Geeta Chauhan and Mohinder Kaur even walked up to Lata to rebut her claims. They said they had expertise in varied fields, based on which they had been named by the Governor. BJP councillors, who had heated exchanges with AAP members, hit back saying they had not been appointed by the Punjab Governor or UT Administrator. “When we were in the Opposition, we respected the boundary and didn’t break tradition with regard to nominated councillors. These all are ‘navratnas’ and come from diverse backgrounds to guide the House. AAP councillors are good at heart, but have a political compulsion to protest,” said BJP councillor Saurabh Joshi. The nominated councillors are Geeta Chauhan, Anil Masih, Dr Ramneek Singh Bedi, Amit Jindal, Umesh Ghai, Satinder Singh Sidhu, Dr Naresh Panchal, Dharminder Saini and Mohinder Kaur.

The MC House approved Rs 1.75 cr for reconstruction of a foot overbridge at Faidan village. Due to heavy rainfall and flooding in Faidan choe during this year’s monsoon, the bridge had got damaged and abutment on side had tilted.