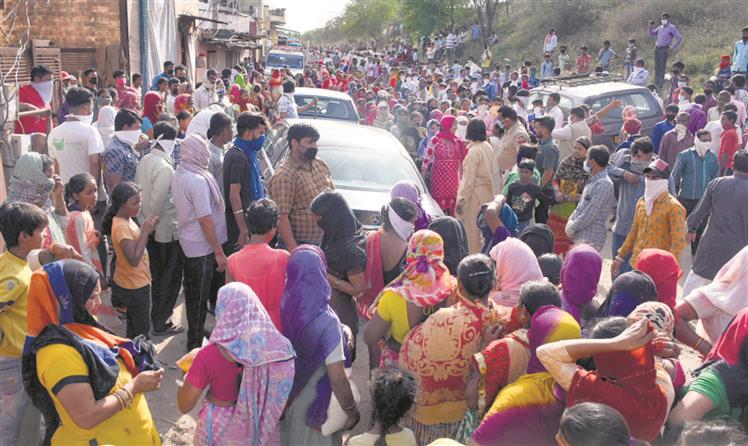 Social distancing goes for a toss as residents rush to get free food at Faidan village in Chandigarh on Monday. Photo: Manoj Mahajan

The city reported five Covid positive cases today — three direct contacts of the eighth patient and an NRI couple, who had returned from Canada — raising the tally to 13. Besides, a 65-year-old man from Nayagaon in Mohali tested positive for the virus.

The Sector 33-A-based NRI couple had come from Canada on March 13. They developed symptoms on March 26 and got admitted to the GMCH-32 on March 28. The couple was not on the quarantine list and also did not follow the 14-day quarantine as per the protocol. As many as 21 persons have been put under quarantine from Sector 33-A.

Two residents of Sector 29-B, both aged 23 and friends of the eighth Covid patient, have been found positive at the GMCH-32 today. The 40-year-old mother of the eighth patient has also tested positive.

The 22-year-old man from Sector 30-B had tested positive for the deadly virus on March 27. He reported to the GMCH after apprehending the loss of smelling sense as a Covid symptom on March 25.

Of the 13 positive cases in the city, 12 are admitted to the GMCH and one to the PGIMER. The city reported its first Covid case on March 18 when a 23-year-old woman, who had come from London, tested positive. Later, six more cases linked to her were reported. A Sector 19 resident, a doctor who treated Covid patients in the UK, also tested positive and was admitted to the PGIMER. The 26-year-old woman tested negative for Covid at the PGIMER recently and will be discharged after the expiry of 14-day quarantine period.

A total of 1,014 persons are under home quarantine in the city. Meanwhile, a 65-year-old man, a resident of Nayagaon, was found positive for coronavirus today and has been admitted to the PGI. His close relatives have also been put under the supervision of the Health Department authorities.

Chandigarh: The UT Administration has decided to give six-month extension in service to medical and paramedical employees who have attained the age of 58 and were to retire on March 31. The Administration had decided to follow the Punjab Service Rules in respect of the retirement age. UT Adviser Manoj Parida said the extension had been given to doctors and paramedical staff as being done by the Punjab Government. On February 28, Punjab Finance Minister Manpreet Singh Badal had announced reduction in the retirement age of employees to 58 years. With the implementation of the Punjab Service Rules in the city, it will immediately affect nearly 600 of the nearly 24,000-odd employees. Nearly 240 employees will retire on March 31 and nearly 350 on September 30. TNS

Police round up 303 city residents

Chandigarh: A total of 303 persons were rounded up in different parts of the city on Monday. The police said while 152 vehicles were detained,189 were impounded. The police said various internal nakas were laid to catch violators using vehicles to visit sector markets. TNS

Chandigarh: The UT police have booked a tavern owner at Mani Majra for forcing eight employees working at his tavern to leave. According to the police, Mahesh Kumar, a resident of Sector 25, Panchkula, operates a tavern on the old Ropar road in Mani Majra. The police said following the curfew orders, Kumar forced his eight employees to leave. The police came to know about the incident, following which a case Sections 188 (disobedience to the order duly promulgated by public servant), 269 (negligent act likely to spread infection of diseases dangerous to life) and 270 (malignant act likely to spread infection of disease dangerous to life) of the Indian Penal Code was registered against the tavern owner. He was arrested and later released on bail. TNS

No new case in Panchkula

Panchkula: Deputy Commissioner Mukesh Kumar Ahuja on Monday disclosed that the situation in view of Covid-19 was totally under control and no new case has come to the fore in the district. Ahuja said 315 people had been kept under observation, of which 300 had been home-quarantined. He added that five persons had been kept in the isolation ward at Civil Hospital while three were admitted to the Command Hospital. The DC said four persons had been quarantined at Nada Sahib Gurdwara. He said 39 samples have tested negative for coronavirus and reports of three were awaited. TNS