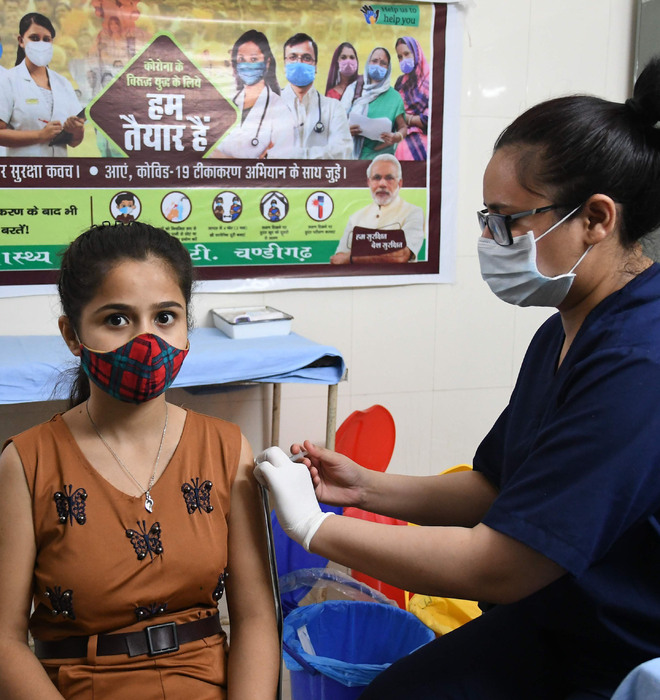 A girl gets vaccinated at Sector 8 in Chandigarh on Wednesday. Tribune Photo: Manoj Mahajan

The pandemic played havoc with the lives of non-Covid patients as the healthcare system remained inaccessible with physical OPDs shut and elective surgeries delayed at city hospitals.

Mukul Sharma (30), a resident of Chandigarh, said, “My mother was diagnosed with breast cancer in 1998. Since then, she had been visiting the PGI every year for a follow-up. However, now, almost two years have passed and she has not visited the doctor due to Covid. She has not been able to follow up her treatment. I called up at the PGI reception, but was told follow-ups were not being done and only serious were being treated, that too after teleconsultation with the doctor concerned.”

Another city resident, Narender Chauhan, said, “My father’s surgery is pending as elective operations are not being performed at the PGI.”

Kanwaljit (37) said, “My joint got dislocated in February last year. The whole year, I was in terrible pain as there was no access to doctors and the PGI was closed. As there was no OPD, I got online consultations, but these did not make much of a difference.”

“I had an open heart surgery in February 2020 and soon after, the lockdown began and follow-up sessions were almost gone as mostly these were being done through videoconferencing, which wasn’t much of a help,” said 75-year-old Balvinder.

The PGI held a meeting on Wednesday to discuss the opening of OPDs and operation theatres (OTs) in view of a decline in the cases. Dr Jagat Ram, Director, PGI, said, “We are going to continue with the same routine as of now because we don’t want to spread transmission. OTs will be opened as per the requirement.”

Dr Jasvinder Kaur, Director, GMCH, Sector 32, said, “We have extended teleconsultation from 9 am to 1 pm, and those who need physical examination will be called. We will open OTs soon and patients whose surgeries are pending will be contacted.”