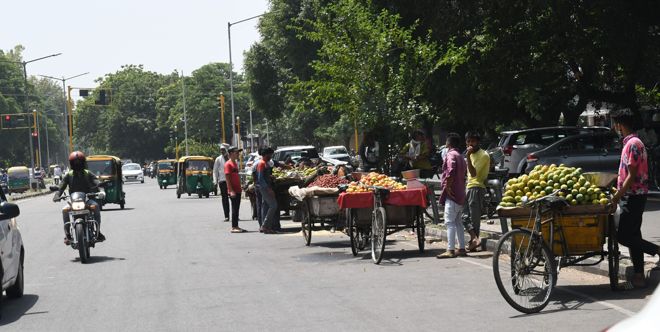 Fruit vendors on a road in Sector 20, Chandigarh. File photo

As many as 293 cases of street vendors have been received by the Grievance Redressal and Disputes Resolution Committee (DRC). Relief has been provided to the vendors in four of these cases.

The committee comprises retired judge Jasbir Singh as Chairman, retired deputy secretary of Punjab Sukhcharan Singh and retired assistant commissioner of Punjab Surjit Singh as members. It was formed on January 17 this year.

The cases have been filed to the committee between January 17 and May 30. The most cases pertain to issues such as not getting vending space even after registration, non-issuance of a vending licence after the death of a family member and “unnecessary” challaning.

The DRC Chairman wanted a courtroom setup which was not part of the building plan. However, I have asked the engineering wing to redesign the same if norms permit. Staff have been provided to the committee. However, we have received a request for more staff, which will be provided to them by the office this week. —Anindita Mitra, MC Commissioner

Talking to the Chandigarh Tribune, the Chairman of the committee said, “We received 293 cases from unregistered as well as registered vendors. We have resolved four cases and ordered the MC to provide them space. These are old cases.”

For five years, most vending sites allotted by the Municipal Corporation have remained vacant, while the vendors are operating from unauthorised spaces occupying corridors, pavements, road berms and even parking lots.

Nearly 10,000 registered vendors figured in a survey in 2016. They were allotted vending sites for five years and had to pay a monthly licence fee. However, most vendors did not shift to the permitted sites, citing locations not being business-friendly. Many continue to operate from unauthorised sites, making the Act purposeless.

Some alternative sites were later approved by the Administration, but the move turned futile as the vendors have not shifted to these places yet. To top it all, the Town Vending Committee, formed in 2016 for the implementation of the Act, has been lying defunct for over a year. The five-year tenure of the panel ended in March last year. Since then, it has not been constituted.

Chairman of the committee Jasbir Singh said, “There is an 8X8 committee/court room and it is not possible to accommodate 25-30 persons during hearings. There is no proper sitting arrangement for members, advocates and vendors who have to stand in corridors. There is no person for delivering summons. We have written to the MC in this regard, but to no avail.”