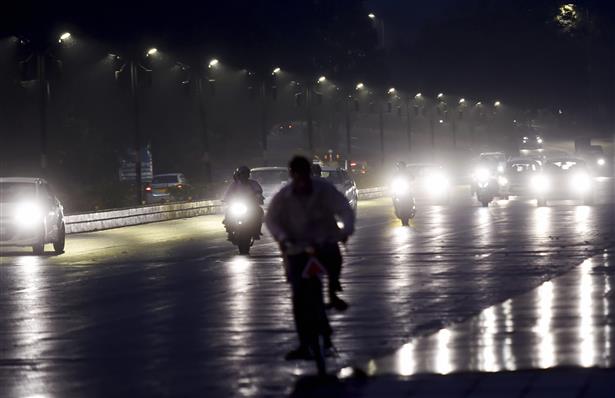 Commuters ride through rain, at Rajpath in New Delhi on November 15, 2020. — PTI

A day after Diwali, rain lashed parts of Punjab, Chandigarh, Delhi, Haryana, and Uttar Pradesh. Several areas witnessed rain and thunderstorm due to a western disturbance.

Parts of Punjab and Haryana also witnessed a hailstorm— leading to a fall in temperature. The minimum temperature has dropped to 10 degrees Celsius at various parts of Punjab.

The IMD had predicted light rain with thunder and lightning over and adjoining areas in parts of Haryana, including Hodal, Palwal, Ballabhgarh, Hisar, Narwana, Hansi, Jind, Safidon, Panipat, Kaithal, Karnal.

Light rains and thundershowers in parts of Punjab have brought cheers to the farmers—especially the wheat growers, who had sown their crop without burning the paddy straw.

Apart from this, it was also beneficial for those, who were preparing to sow wheat, and other rabi crops, including fodder for animals.

Despite this, the air pollution levels were likely to fall in this agrarian state.

Post-Diwali, the firecrackers increased the AQI on Saturday, but the rains have brought much-needed relief for all the living things in the region.

Ropar's temperature was 2 to 3 degrees celsius less than compared to the normal temperatures.

It is expected to decrease in the next 48 hours, indicating the officials at the weather department.

“The current active wet spell over Punjab was likely to improve with an expected fall in minimum temperatures”, said an official of the meteorological department.

The National Capital and its suburbs recorded light rainfall on Sunday under the influence of a fresh Western Disturbance, according to India Meteorological Department.

Higher wind speed aided the dispersion of pollutants. The maximum wind speed was around 25 km per hour, IMD officials said.

The Safdarjung Observatory, which provides representative data for the city, recorded 0.4 mm rainfall.

On Sunday morning, after the Diwali celebrations, a thick blanket of noxious smog had enveloped the national capital and shot up the pollution in the city to "emergency" level.

The weather department has predicted light showers at a few areas in the state on Monday. — With agencies