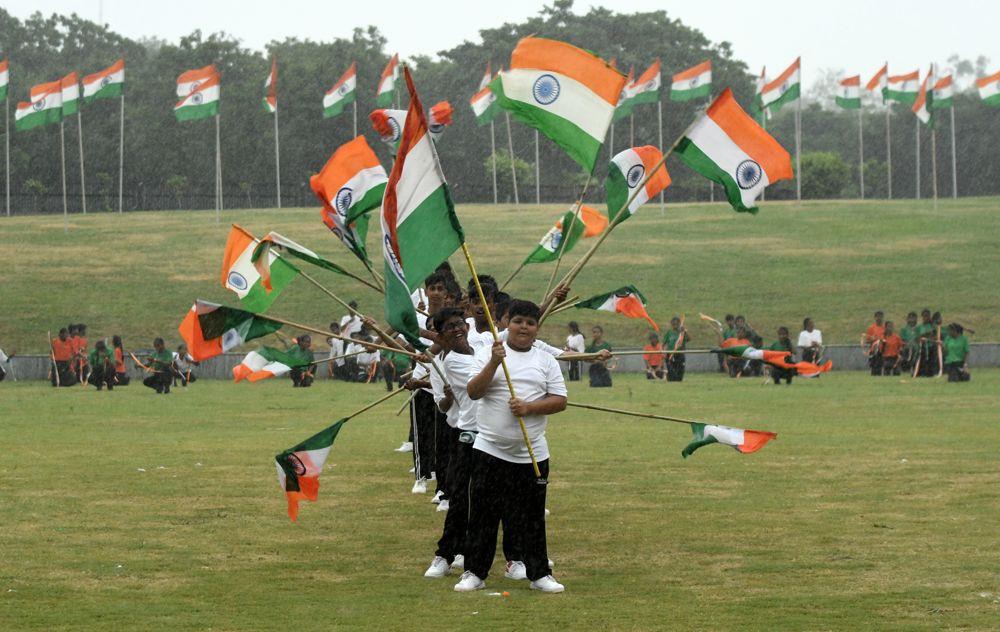 Children perform during a programme under the Har Ghar Tiranga campaign at Urban Park, Sector 17, on Sunday. Ravi Kumar/Pradeep Tewari

Independence Day fever has gripped the city like never before. As Indian will complete 75 years of its Independence tomorrow, prominent buildings, houses and commercial spaces have been either decorated with national flags or illuminated with Tricolour lights.

Government buildings, including the UT Secretariat, Police Headquarters and the Capitol Complex, which have been illuminated with the Tricolour lights, are catching everyone’s attention. Many residents have painted their gates in Tricolour.

“It is a different feeling to be able to possess the national flag and hoist it atop our house. I will respectfully preserve it and will again hoist it on Republic Day. I like the ‘azadi’ fervour this time around,” said Manpreet Singh, a resident of Sector 22.

Many roundabouts have been decked up with national flags and the Tricolour lights. Tricolours fluttering atop two-wheelers, four-wheelers and even auto-rickshaw can be seen across the city.

The Sector 22-C Market Welfare Association is celebrating this Independence Day in a unique way. They have put up a large tricolour platform where patriotic songs such as “Mera rang de basanti chola” and “Maa tujhe salam” are being played. The pictures of Mahatma Gandhi, Shaheed Bhagat Singh, Rajguru and Sukhdev have also been displayed on the platform.

Visitors to the market enjoy swings, which have been decorated with Tricolour flowers. The market association has also set up a stall where “Azadi ka Amrit Mahotsav” T-shirts, flags, India’s map and other Independence Day-related items are being sold. “The money earned from this stall will be used in distributing ‘laddoos’ to people on Independence Day. This I-Day is more special as India will complete 75 years of Independence. On a call of the Prime Minister, we are our doing out bit in the celebrations. We have run short of national flags due to the high demand from the public. People are enjoying the environment and the city is in the patriotic mood,” said Praveen Duggal, president of the association.

The Guinness World Record for ‘Largest Human Image of a Waving National Flag” was created by 5,885 people at the Cricket Stadium, Sector 16, yesterday. The event was organised by the NID Foundation and Chandigarh University.

On Thursday, activists put up the Tricolour at the main gate of Gurpatwant Singh Pannu’s house in Sector 15. Pannu, founder of the banned organisation, Sikhs For Justice, has asked people to hoist the Khalistani flag at key places on Independence Day.