Say his investments, accounts under lens; money trail being probed 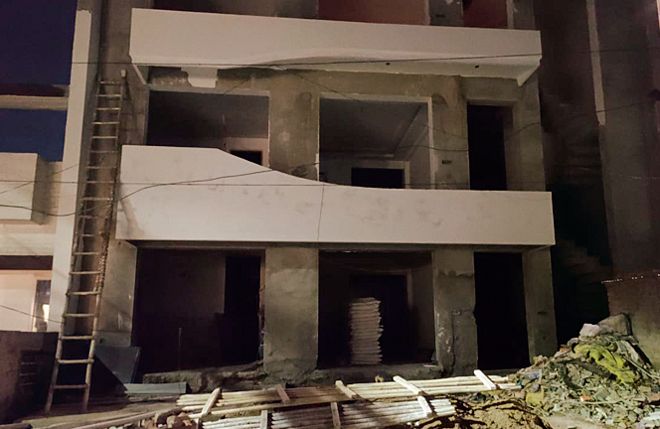 The house in Sector 37, which was being allegedly grabbed.

The UT police today carried out a search at the house of Sanjeev Mahajan, a journalist, who was arrested on a charge of land grab.

A team, led by the ASP (South), searched Sanjeev’s house in Sector 37 in the evening.

UT SSP Kuldeep Singh Chahal said they were also investigating the money trail. “We have found six bank accounts of Sanjeev, which are being scrutinised”, the SSP said.

The SSP said investments made by Sanjeev in the past would also be probed. Sources said the police were also gathering information about properties, if any, owned by him.

Singla, who is yet to he arrested, had earlier joined the investigation on February 20 this year. In his statement to the police, Singla had stated that in April 2017, Ashok Arora, alias Mannu, had told him that Sanjeev had a deal regarding a house in Sector 37. Singla and Arora then met Sanjeev, who told them that his associates have the possession of the second floor of the house and they would vacate it if Singla wanted to buy it. According to Singla, he had refused to purchase the property. However, a few days later, Ashok visited his office in Sector 40 and told him that Sanjeev had sold the house to Satpal Daggar, brother of a UT DSP, for Rs2.40 crore. Singla, along with Ashok, then met Satpal and Singla offered to buy 50 per cent share of the house. However, Satpal agreed on a 33 per cent share.

After finalising the deal and paying a certain amount of money, on April 27, 2017, a GPA was executed in the name of Singla and Kadiyan. Singla, in his statement to the police, claimed that he later asked for the registry to the house. However, it was not done following which he demanded his money back.

After that, he arranged a meeting of Ashok and Satpal with his friend Manish Gupta, who agreed to purchase the house.

The GPA was cancelled and later, the sale deed was executed in the name of Manish’s brother Saurabh Gupta. According to Saurabh, who had recorded his statement with the police on February 18 this year, they had purchased the house for Rs2.90 crore.