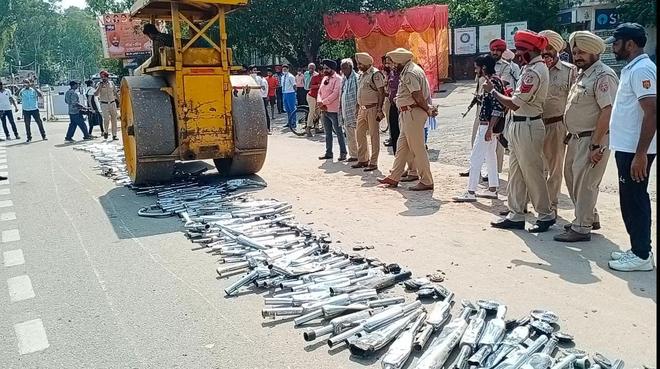 The modified silencers being crushed in Fatehgarh Sahib.

The district police destroyed modified silencers removed from Bullet motorcycles by crushing these under a road roller in front of MG College, Fatehgarh Sahib, giving a clear signal to youngsters that no such nonsense will be tolerated. SSP Sandeep Goel, while addressing mediapersons, said youngsters often modified silencers of their motorcycle to make a loud sound.

He said the district police had launched a campaign against anti-social elements and drug peddlers by involving NGOs, trader organisations and teachers of universities, colleges and schools. The SSP said he had been receiving complaints about nonsense by youngsters and the police started a campaign to remove modified silencers. He said police officials visited schools, colleges and universities and appealed to youngsters to remove modified silencers from their motorcycles on their own. He said more than 1,400 silencers and horns were removed and destroyed. He said the motorcycle of repeat offenders would be impounded and a heavy penalty imposed on them.