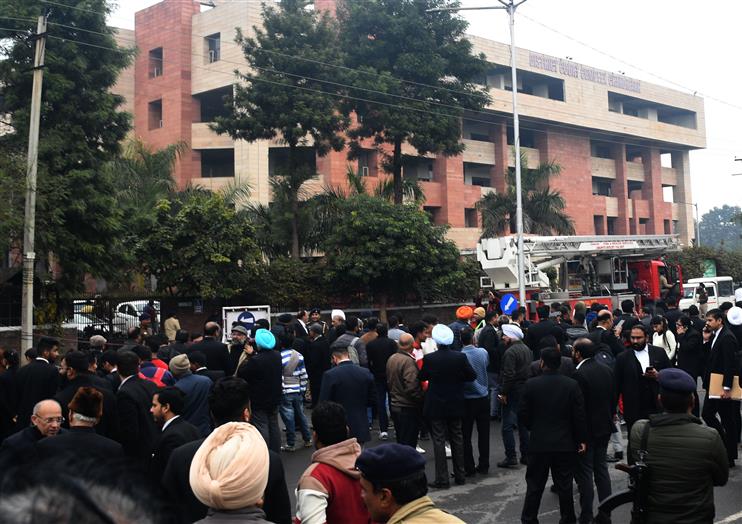 An outside view of District Courts after bomb threat call received by police in Chandigarh on Tuesday. Tribune photo: Vicky

The Chandigarh District Court premises in Sector 43 was evacuated by the police on Tuesday after a bomb threat call was received.

Advocate Vinod Verma said he was in the court when the police asked all persons standing there to vacate the premises. The police informed them that they have received a call regarding a bomb on the premises. He said that he was under the impression that the police was carrying a mock drill for the security of the court complex.

He said within 20 minutes all the people including court staff, judges and advocates were evacuated from the premises.

Earlier, many people also thought it was routine mock drill of the police in view of the Republic Day. The police were also not revealing much about the operation.

In the afternoon, Chandigarh Police SSP Manisha Chaudhary made it clear that it was not a routine mock drill. She said Chandigarh Police had received information from Haryana Police that there could be bomb in the District Court premises or at ISBT, Sector 43 Chandigarh. She said that soon after getting the information, the area was cordoned off and massive search operation was launched.

She said police have found a carry bag which contains a tiffin and water bottle. “We have got it checked it from the Bomb Disposal Squad teams of the Chandigarh and Punjab Police and prima facie they found nothing suspicious in it. But they want to be double sure about the suspected items and have called the Bomb Disposal Squad team of the army to check it,” the SSP informed.

During search, heavy police force was deployed in the area and bomb disposal and dog squads were pressed into service. The advocates and other people were not allowed to take their vehicles parked on the premises due to security reasons. After more than 4 hours of checking, the advocates were allowed to take their vehicles. Judicial work and the court proceedings were also affected due to the operation.

Shankar Gupta, president, District Bar Association, Chandigarh, said the advocates have supported the police fully in the operation. He said there is need to increase the security of the court complex.