Levy for over 30-minute halt to be reviewed 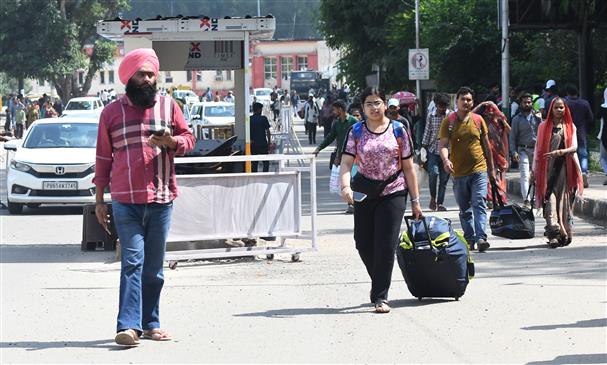 Passengers lug their baggage as cab and auto-rickshaw drivers refuse to enter the pick up and drop off zone at the Chandigarh Railway Station on Wednesday. Tribune photo: Ravi Kumar

Facing flak from public over charging of Rs 1,000 as deterrent penalty from vehicle owners as part of the new pick up and drop off system introduced at the Chandigarh Railway Station, the authorities have decided to put the levy on hold. There will, however, be no change in the rest of the system.

The authorities will hold a review on whether to withdraw or reduce the Rs 1,000 fine in a bid to provide some relief to vehicle owners staying beyond 30 minutes after taking the drop-off ticket.

Both private and commercial vehicles will continue to be charged Rs 50 for up to 15-minute stay and Rs 200 for up to 30-minute halt in the pick up-drop off zone.

Hari Mohan, Senior Divisional Commercial Manager, Ambala Division, said the fine had been incorporated into the pick up-drop off system to discourage taxi drivers, who kept commercial vehicles parked at the railway station for long periods, causing unnecessary chaos and inconvenience to passengers at the railway station.

Mohan said there was some misconception about the Rs 1,000 deterrent fine, which was not a parking charge.

For the first six minutes, no charges would be levied on those picking up or dropping off passengers at the railway station gate. Commercial vehicles would continue to pay Rs 30 for the period, he said.

He, however, failed to justify charging of fee from drivers getting caught up in long queues at the exit point, thereby exceeding the six-minute limit.

Mohan said the six-minute drive through system had been adopted after a thorough survey and ground checks at the railway station by a team constituted by the division.

The system was running successfully at the Delhi Railway Station for the past three years and those getting held up in queues had to pay if their exit was delayed, he said, adding there was no proposal to increase the six-minute free period.

Mohan, however, admitted the survey to check effectiveness of the six-minute exit system did not factor in time consumed by differently abled and senior citizens. He said they would address the issue soon.

Asked whether there was a possibility of the parking contractor using dummy cars to create queues at the exit point in a bid to delay visitors, the official said it was highly unlikely.

Mohan said after taking over from the Indian Railway Catering and Tourism Corporation (IRCTC), they had reduced parking charges at the station. Those taking the parking ticket are being charged Rs 20 for two hours, down from Rs 30 charged earlier for the duration.

Even the monthly pass charges had been reduced by 75 per cent. Four wheelers were being charged Rs 1,000 per month for a monthly pass against Rs 4,000 charged by the IRCTC. He urged visitors who wished to stay longer at the station to park vehicles in the normal parking area to avoid deterrent penalty.