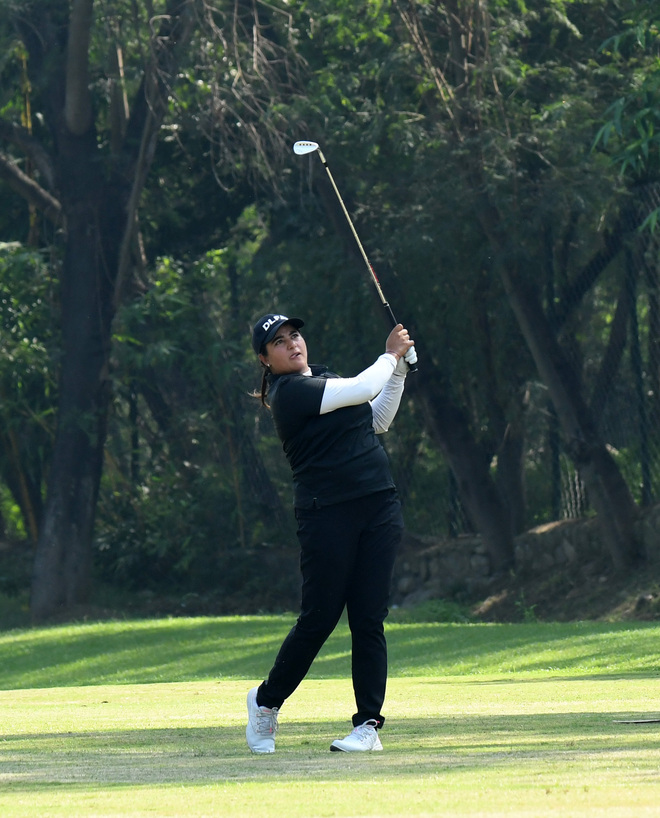 Amandeep Drall watches his shot at the 13th hole on the last day of the 10th leg of Hero Women's Pro Golf Tour in Chandigarh on Friday. Tribune Photo: Pradeep Tewari

Panchkula golfer Amandeep Drall drilled eight birdies against one bogey for a 7-under 65 to win the 10th leg of the Women’s Pro Golf Tour by three shots at the Chandigarh Golf Club.

Amateur Avani Prashanth, who shared the overnight lead with Amandeep after two rounds, was left three shots behind despite a 4-under 68. She finished in second place. Vani Kapoor tripped to 1-over 73 and was fourth while Jahanvi Bakshi (68) was third.

Amandeep (28) who gained tremendously by competing in Europe over the past few months had started the week with 4-under 68 before slipping on the second day with 74.

In the final round, she fell back by two shots after the first hole as she bogeyed the first and playing partner and overnight co-leader Avani had a birdie on the same hole.

Soon after Amandeep found her form as she birdied second, fourth, sixth and seventh to turn in 3-under 33. Avani dropped a shot on fourth where Amandeep had a birdie for a two-shot swing. That helped Amandeep go ahead by one. Like Amandeep, Avani also birdied the sixth and seventh but was still one behind at the turn.

On the back nine, Amandeep drove off on her own with three birdies in a row from 11th to 13th. Both birdied the 16th but with two holes left and three shots clear, Amandeep made no mistake and Avani was unable to find any more birdies.

Jahanvi Bakshi could have given Avani a run for second place but suffered a double bogey on the Par-3 14th, and even three birdies in the last three holes for a 68 gave her only the third place.

The win also cemented Amandeep’s place on top of the Hero Order of Merit, which she was already leading.