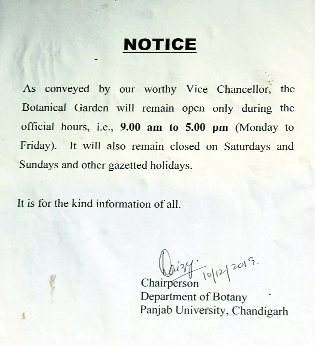 In the wake of the molestation incident reported at the crack of dawn from Panjab University’s botanical garden, the Vice-Chancellor has ordered to restrict the timings of the garden.

A public notice issued by the Department of Botany stated that the garden would remain open only during the official hours between 9 am and 5 pm from Monday to Friday and will remain closed on Saturday and Sunday.

Prof Ashwani Koul, Chief University Security, convened a meeting with the Vice-Chancellor today where it was decided to install CCTV cameras at key locations around the campus. The issue of raising the height of the wall was taken up with the Municipal Corporation authorities. The issue of installing barbed wires above the wall was also deliberated upon.

The molester had tried to drag the woman journalist