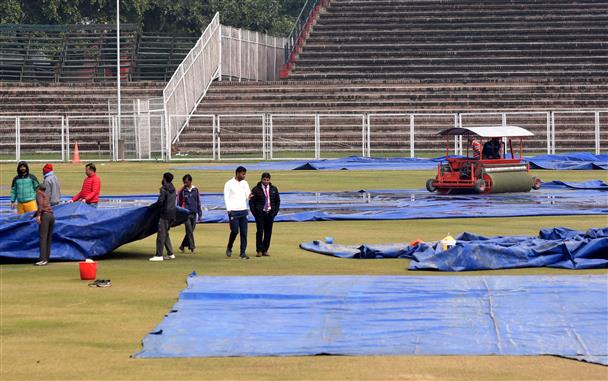 Workers cover the ground during the Chandigarh-Jammu and Kashmir match at the Cricket Stadium, Sector 16, in Chandigarh on Wednesday. TRIBUNE PHOTO: RAVI KUMAR

At IS Bindra PCA Stadium, Mohali, the match between Punjab and Vidarbha was restricted to 31 overs. Punjab skipper Mandeep Singh won the toss and put Vidarbha to bat. The visitors opened with FY Fazal and SR Ramaswamy. The duo raised a 45-run partnership for the first wicket, before Baltej Singh gave Punjab their first breakthrough.

Ramaswamy (29 off 55 balls, with four boundaries) was the first wicket of the day. Fazal, meanwhile, tried to put his best show, but failed as he was trapped by Baltej for 19 off 57 balls (with two boundaries). The openers left the side struggling at 56/2. However, Atharva Taide (26) and YV Rathod (14) remained unbeaten for the side. The duo pushed the total to 88/2, when the field umpires called off the day due to bad light.

The weather conditions were similar at the Sector 16 Cricket Stadium, where Chandigarh lads were lined up to take on Jammu and Kashmir. Due to wet outfield, the second day was cancelled. The host openers Arjit Singh (8) and Mohammed Arslan Khan (6) had scored 18 for no loss on Tuesday. Also, while the host team reached the match venue on the reporting time issued by the BCCI, the visiting team had opted to stay in their hotel during morning session.