Demons’ effigies to go up in flames sans crackers in UT 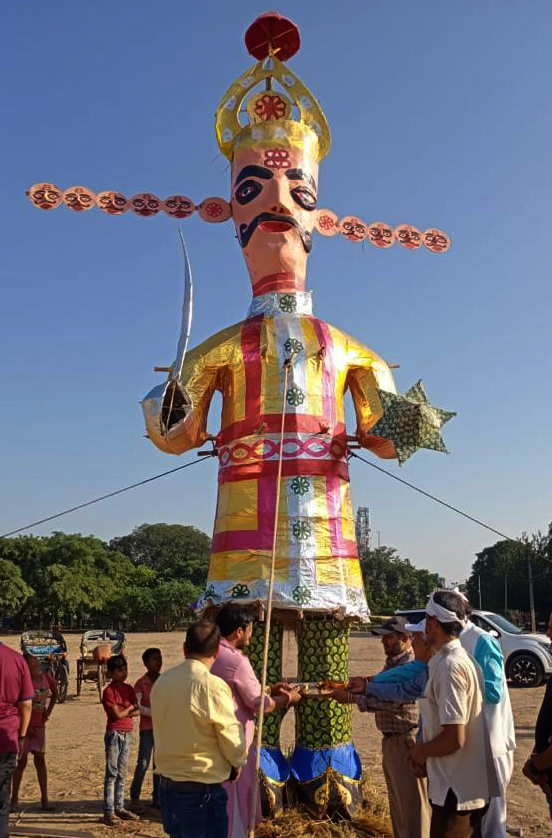 For the first time in the city, effigies of Ravana, Kumbhakarna and Meghnad will be burnt without crackers on Dasehra, that too only at 10-15 sites.

Due to the late permission given by the UT Administration to the organisers and the subsequent ban on the sale and use of crackers announced two days ago, most of the organisers have stayed away from organising the event tomorrow.

Unlike neighbouring Mohali and Panchkula, where there is no such ban, Dasehra celebrations, which signify the victory of good over evil, will just be a formality in the city.

“Every year, Dasehra events are held at 48 sites. But this year, effigies will be burnt at only 10-15 places. The administration should have told us in advance. A huge amount of money has gone waste. We are in a fix about the use of crackers and will see in the morning what to do,” said Gulshan Kumar, president, Azad Dramatic Ramilla and Dasehra Committee, Sector 20.

The committee has been organising the event at the Sector 34 ground in front of gurdwara for the past many years.

“The Administration should have allowed crackers during Dasehra. It is a matter of just one day. The decision has hurt our sentiments. Is the NGT ban only for Chandigarh?” Kumar asked.

At Sector 34, however, some of the tallest effigies – Ravana (65ft), Kumbhakarna and Meghnad (60ft each) – will be set on fire this year. Meanwhile, some people have been forced to hold a symbolic Dasehra due to the ban and MC’s late decision.

“We had planned 75ft, 65ft and 60ft effigies. However, after the cracker ban, we are only putting up a 25ft Ravana effigy. We will hold a customary shobha yatra carrying Ravana effigy in Sector 46 so that people avoid coming to ground in view of Covid norms. Burning of effigies will be telecast live on YouTube and some local TV channels,” said Jatinder Bhatia, chief patron of the Sector 46 Dasehra committee.

Even as there is a ban on crackers, city unit head of the BJP and MC councillor Arun Sood created unnecessary confusion by asking people to use crackers during Dasehra celebrations. Sood issued a press release claiming that he had met UT Adviser Dharam Pal and various police officers and informed them that the NGT ban was restricted to Diwali only. Sood told people to use crackers and promised he would take care of everything. However, a senior UT official told Chandigarh Tribune that no relaxation had been given.

College student Altaf Raja, who along with 15-20 boys, makes Ravana effigies, said: “We had made the Ravana effigy with crackers. But after the ban, we had removed the crackers. Now, after listening to what Sood has said, we have put the crackers back on the effigy. We don’t know what to do tomorrow,” he said.

Chandigarh: In view of heavy traffic during the Dasehra celebrations at the Parade Ground, Sector 17, the police have urged people to park their vehicles in the parking area of Sector 22 market, adjacent to Blood Disease Hospital, Sector 23-B, Sector 17 football ground parking, rear and front side of Neelam Cinema in Sector 17 and the parking area adjoining Sector 17 bus stand. The traffic shall be diverted from the ISBT-17 chowk, on Udyog Path, from 5.30 pm to 6.30 pm, the police said, adding that vehicles coming from 17/18 light point, Aroma light point, Sector 18/19/20/21 chowk and cricket stadium chowk will be diverted. Only buses will be allowed to ply on this stretch, they added. TNS