Claims beaten up thrice each day, one of the cops spat on his face & was asked to walk while his feet bled 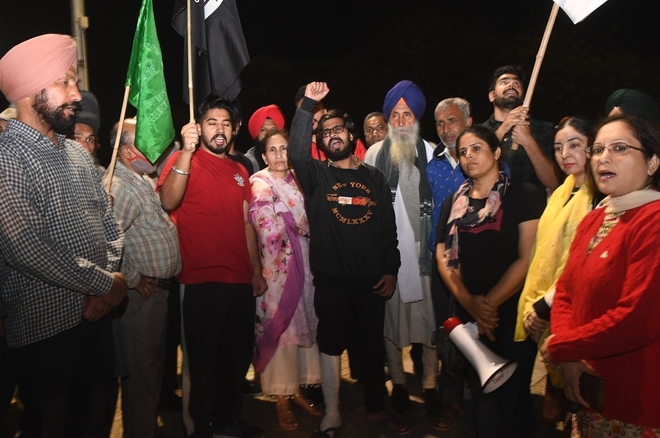 Shiv Kumar joins a protest against the farm laws at Matka Chowk in Chandigarh on Friday. Tribune Photo: Vicky

After the sessions court at Sonepat granted bail to labour rights activist Shiv Kumar (24) on Thursday in an attempt-to-murder case on the “grounds of parity”, he arrived at the PGI today after his release from the jail. He was earlier granted bail in two cases of rioting and extortion on Wednesday.

At the hospital, after doctor’s consultation, an X-ray was performed on him, the reports of which will be out on Saturday, said his friend Jasminder, who accompanied Shiv’s father Rajbir and another friend Ankit. Joined by some members of the Students for Society (SFS), Panjab University’s student organisation, the trio marched straight to Panjab University, outside the VC’s office where members of PURSA staged a hunger protest.

Shiv Kumar, president of the Mazdoor Adhikaar Sangathan, sat on a chair, with plaster on his right leg, and narrated the tales of brutality meted out to him at the Kundli Police Station. “From January 16 to January 23, I was beaten up every day at least three times daily for a minimum of one hour. The cops would ask me where the organisation’s getting funds from,” he said.

Shiv tailed the memories of his arrest from the Kundli border. “I was at the washroom near a KFC outlet at Kundli. Safai karamchaaris asked me to get out. Some four or five people, dressed as civils, put a cloth on my face, pointed two pistols at me and asked me to walk with them. I screamed for help, but in vain. After walking a while, they asked me to sit me in a car. At that time, I got to know they were police,” he said.

“They drove me to a police station, Staff One behind Purani Kachairi near Gur Mandi in Sonipat. There, they removed my clothes, at beat me up brutally, like an animal. My hands were tied. They hit my feet. My toes were bleeding. Then, they hit my hands in the same way. Cops would get tired, but the beating wouldn’t stop. Pattey maarey hai, stretch khol dena, koladi pherna, chappal maarna.... one of the cops even spit on my face. This is how they tortured me for three hours. Then I was asked to walk, while my feet bled,” he said.

The police, said Shiv, would not allow him to talk to his parents despite repeated requests. “I gained strength from Bhagat Singh. He was beaten up too. Also, a comrade’s words gave me support, he would say: ‘pair toot jaye, honsala nahi tootna chahiye’,” Said Shiv.

The police has slapped charges of extortion on Shiv, but that, says, Shiv is absolutely baseless. “I feel it was a backlash of labourers siding with farmers on the ground level. We maintain a diary and have helped a minimum of 300 labourers with their salaries amounting to some Rs5 Lakh. I’ve been part of the sangathan and its founding member since 2018,” he adds.

Shiv still gets sleepless nights thinking about the days he spent in jail. “I was presented in court on January 23 at night, somewhere between 10 pm and midnight, while others were presented during daytime. I was locked up in the car and the IO and another police officer spoke to the judge. They came with remand orders. I was then left at the Kundli police station for 10 days. There, I was mentally harassed and verbally abused even though they didn’t beat me up during the remand time,” he said.

Shiv still wonders why other people who were jailed with him, one arrested for peddling heroine, other for theft or robbery, weren’t beaten up as much as he was?. “They we’re asking me the same question. But I didn’t have any answer. On knowing about me even they’d support me,” He said. Kumar said, he would be leaving for Tikri and then Singhu tomorrow. Today, he also visited protesters at Matka Chownk and Sector 37 traffic lights.