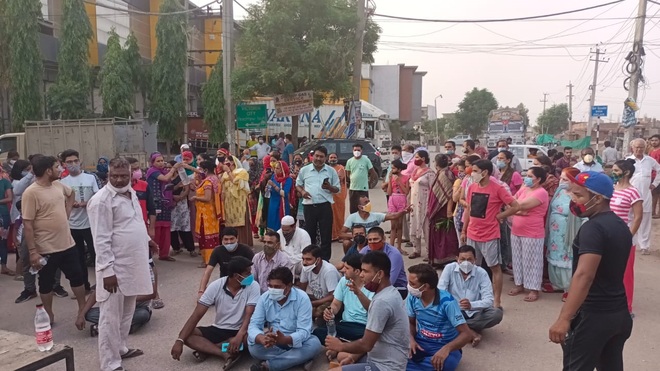 Residents of Victoria City stage a protest on the Babhat-Nabha road on Wednesday.

Facing erratic power supply for more than three days, hundreds of Victoria City residents in Babhat here vented their ire against the PSPCL officials today by coming out on roads and resorting to sloganeering.

The residents complained that they were left without electricity for three days in the peak summer and the PSPCL officials failed to restore the supply.

Moreover, the Junior Engineer, the SDO and the Executive Engineer are not even taking our calls. They don’t bother to inform people when the supply will be restored, alleged the residents.

“Children cannot bear this heat. But the PSPCL officials have not come here once. There is no one here to listen to our grievances that is why we had to come out on road,” said a Victoria City resident.

The residents later staged a sit-in on the Babhat-Nabha road till 9 pm.

Meanwhile, in Shiva Enclave, residents complained that there was no electricity for the past 24 hours.

“There was a loud explosion in the transformer around 8 pm yesterday. Since then there has been no electricity and water here,” said Gulzar Singh, a Shiva Enclave resident.

In Dhakoli too, residents claimed that there was no electricity since 6 pm today.