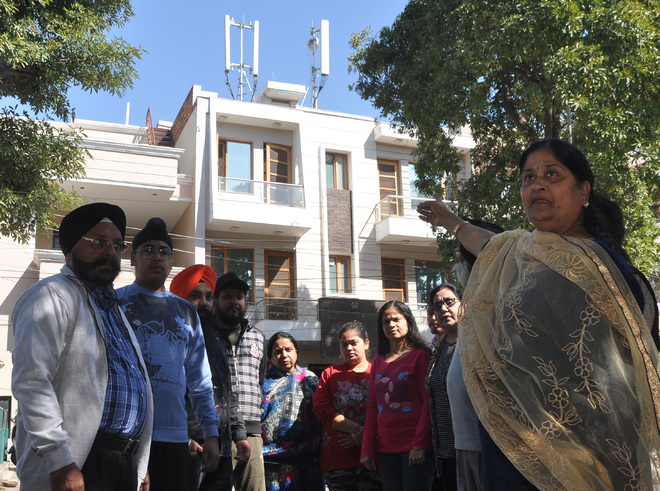 The practice of installing mobile towers in residential areas has become quite common in the district. A number of towers can be seen on rooftops of buildings in various sectors of the district.

Last week, the Greater Mohali Area Development Authority (GMADA) had issued a show-cause notice to a house owner in Sector 68 here where a mobile tower was installed. The house where the tower has been installed is surrounded by a dense locality and a school is also there on the rear side of the house. The residents of the locality are against the installation of the tower.

The area councillor said, “The house owner installed two towers on his roof at a time when no one was outside. We have informed

Bhupinder Singh, a neighbour, said, “We heard a loud noise coming from the top around 4 am. On going up, we found two unknown persons installing the tower and heavy boxes and when we objected, they fled down the stairs. The house is now locked from outside and no one has come here yet.”

Dr Rajbir Singh, another resident, said, “It is a definite threat to the health of children and patients as they are more susceptible to electromagnetic radiations.”

On February 12, GMADA issued show-cause notice under the Punjab Regional and Town Planning and Development Act, 1995, on the name of Congress leader Manish Tiwari. According to the notice, the owner has been asked to remove the tower (of Airtel) installed by violating the building bylaws and without permission.

A spokesman from GMADA said they had issued a show-cause notice to the house owner and asked him to reply within 30 days. He said if the owner failed to reply within this period, the authorities would take legal action against him.