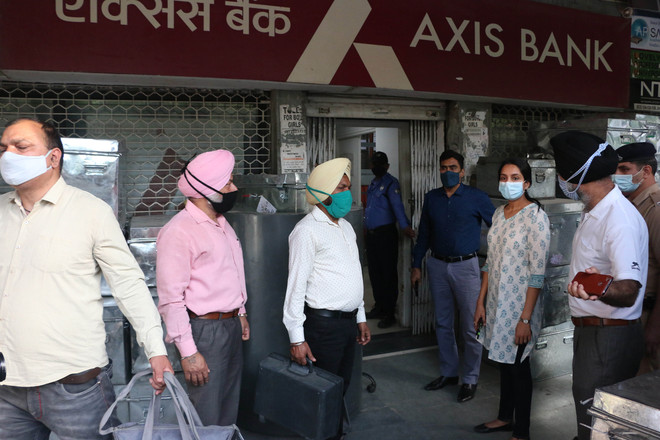 A forensic team at the bank where the incident took place in Sector 34, Chandigarh. Tribune photo

Around Rs4.04 crore was stolen from the currency chest of Axis Bank in Sector 34 here. The security guard, who was on duty on the intervening night of April 10 and 11, is suspected to be behind the theft.

The suspect is identified as Sunil Kumar, a resident of Mohali, who has been working as a security guard for the past three years. He was working with a private security firm.

Sources said the suspect went missing from the duty around 3 am. Punjab Police personnel, who were also on duty at the outer gate, became suspicious after the suspect didn’t return.

Bank officials were informed and the records were scrutinised, which revealed that around Rs4.04 crore was missing. The police were informed about the incident following which they reached the spot and initiated an investigation.

The footage of CCTV cameras installed there was scrutinised, which showed the suspect making multiple rounds in and out of the strong room.

“It is suspected that the security guard kept stealing cash and stacked it somewhere outside the building,” said an official.

A case has been registered in this connection at the Sector 34 police station.

The police conducted a raid at the suspect’s house. However, he was not found there. “The suspect is absconding and raids are being conducted at various places to nab him,” the police said.

The police said the antecedents of the suspect were being verified. His call detail records were also being scrutinised, they added.

Sources said the suspect was having a dispute with his wife and they were living separately.

The police conducted a raid at the house of the suspect, Sunil Kumar, at Sohana. However, he was not found there. “The suspect is absconding and raids are being conducted at various places to nab him,” the police said.