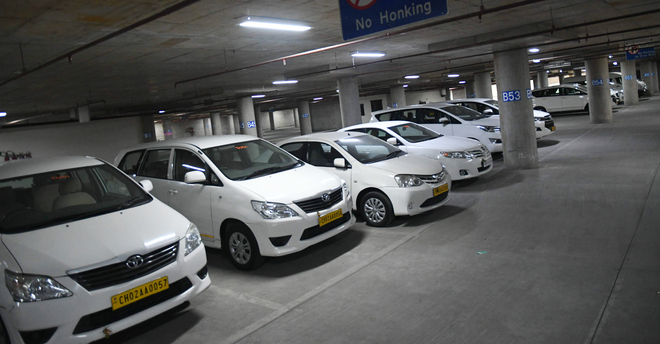 The Rs 48-crore multi-level parking lot of the cash-starved Municipal Corporation is becoming a sort of free taxi stand.

Throwing all rules to the wind, around 70 taxis of a private car rental service operator are being parked with irregular charges on the second floor the parking lot, which is already running into losses.

We used to have our taxi stand here before this parking lot was built. We were not allotted any place by the civic body. We have no option but to park our vehicles here. I know it is not allowed, but we pay charges for all cars.

“This parking lot is operated from 8 am to 8 pm. However, cars of a taxi operator, Tara Brothers, remain parked here even during night hours. The taxi operator is not paying charges for all vehicles. Whenever we ask him for payment, he pays only for a few cars after several days. The parking area is being misused and officers are least bothered about it,” said a source privy to the development.

He said the taxi operator had been parking vehicles here for the past around one and a half years without paying any charges. He had started paying money for the past few months, but did not get slips for all vehicles.

“Someone has damaged the shutter at the parking lot. Thus, these taxis cannot be stopped from entering the lot at night. We have no security to check this practice. Some illegal activities may also take place here at night,” he said.

Manmohan Singh, who runs Tara Brothers, claimed: “We used to have our taxi stand here before this parking lot was built. We were not allotted any place by the civic body. We have no option but to park our vehicles here. I know it is not allowed, but we pay charges for all cars.”

MC Additional Commissioner SK Jain, who heads the parking wing, said: “I will get it checked and seek details.”

Crores have been spent on building this facility, but due to the apathetic attitude of MC officials, people park cars on the roof of the parking lot to avoid paying charges.

“While most part of the multi-level parking lot is lying vacant, people continue to park vehicles on its roof. Most of these cars belong to shopkeepers. Now, visitors have also started parking their four-wheelers on the roof of the parking lot,” said an insider.

“People even park vehicles on footpaths, which damages tiles. In case of an eventuality, it will be difficult for fire tenders or emergency vehicles to find a way,” said an official.

He said: “The Municipal Corporation is busy in increasing water tariffs, but ignoring the place from where it can earn money.”

There are three floors in the parking lot with a capacity to park 950 cars. Most of the parking space here remains unoccupied as not many people prefer parking their vehicles here.