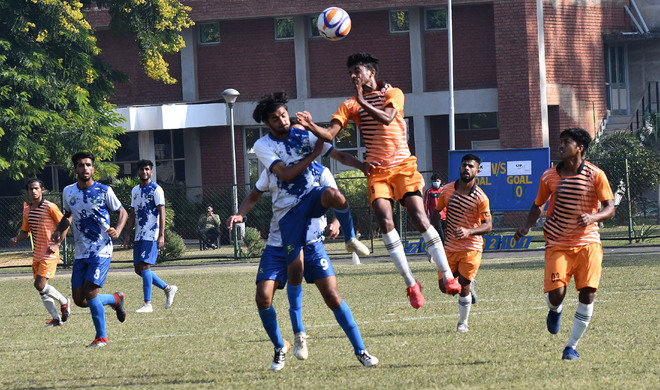 Players vie for the ball during a Santosh Tophy match between Jammu and Kashmir and Uttar Pradesh at the Sector 7 Sports Complex in Chandigarh on Thursday. TRIBUNE PHOTO: RAVI KUMAR

Changes in the playing eleven helped Chandigarh play an attacking game and the side got their first breakthrough in the 10th minute when Gaurav Negi scored his first goal of the tournament.

Having a one goal advantage, Chandigarh started playing for possession. The side was expected to score more goals as they were in complete control of the match. However, the hosts closed the first half at 1-0.

In the second half, Chandigarh boys were once again in command as Shivam Pandey doubled the lead in the 47th minute.

Himachal made some valiant attempts to level the score, but the score line remained unchanged.

Earlier in the morning session, Uttar Pradesh managed to pull off a 1-1 draw against Jammu & Kashmir.

Both teams started off on an aggressive note but it was Jammu and Kashmir which drew the first blood in the 35th minute through Akib Javed.

Uttar Pradesh though made a terrific comeback in the match after the lemon break. The side pulled up their socks and launched back-to-back attacks on the J&K goal. The side finally pulled off the equaliser in the 91st minute after Sunil Yadav latched on to a small mistake by the J&K custodian.