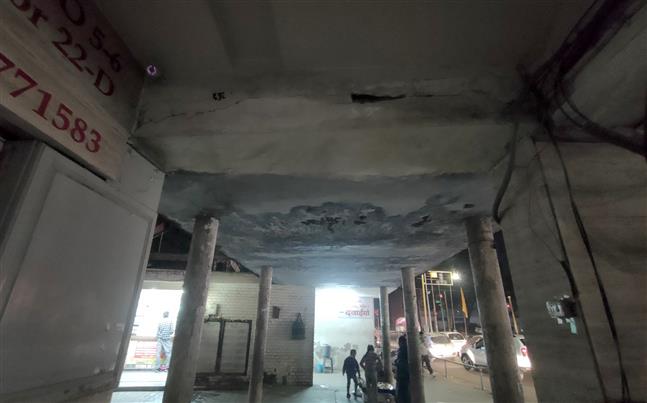 A connecting passage between two buildings in Sector 22 market.

After a safety audit carried out by the National Institute of Technical Teachers Training and Research (NITTTR) here found the existing connecting passages in Sector 22 in “poor” condition, the city Municipal Corporation has proposed dismantling and reconstruction of these structures at a cost of Rs 2.28 crore.

Report says cost of repairs is likely to be very high and will require specialised agency. Even if it is repaired, corrosion in bars will lead to more corrosion afterwards. Repair work may not be 100% effective, it adds.

The safety audit report stated: “The present condition of concrete is of poor quality. The cover to concrete is also not as per ‘codal’ requirement, which has resulted in ‘spalling’ (cracking and delamination from substrate) and corrosion in the building. The ultrasonic pulse velocity (UPV) values have indicated concrete quality is very poor due to spalling and corrosion of concrete cover...”

“The main cause of deterioration is corrosion in the reinforced cement concrete (RCC) members. The passages were not found to have deflection beyond permissible limits. It is possible to repair the passages. The estimated cost of repairs is likely to be very high. Moreover, the repair of the existing passage requires specialised experienced agency as there is excessive corrosion of bar...,” it further stated.

The report adds: “If repaired, any trace of corrosion in bars will lead to more corrosion afterwards. Hence, proper precautions are required to be taken while carrying out repair work, which may not be 100% effective. Moreover, the cost of repair is likely to be very high due to complete replacement of bars and re-concreting at most of locations. Therefore, it is recommended to demolish the passage and construct new one.”

The NITTTR was asked to carry out the audit after the corporation found the condition of the existing connecting corridors very poor, with day by day deterioration due to old construction.

The expenditure for this work will be under capital head “Improvement of Road Parking and Infrastructure Facilities”. This agenda will be tabled in the Tuesday’s MC House meeting for approval.