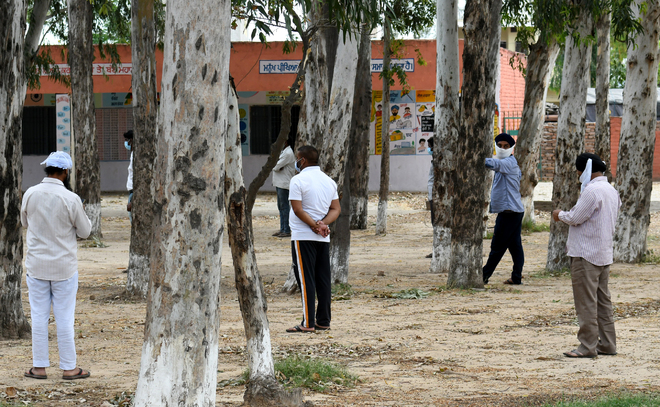 Seven new cases of Covid-19 have surfaced in Jawaharpur village of the Dera Bassi block of Mohali district, taking the total count of people suffering from the disease to 11 in the village and 26 in the district.

Deputy Commissioner Girish Dayalan said a total of seven persons of two families, including the panch who has already tested positive and sarpanch of Jawaharpur, tested positive today. He said the new patients were aged between 12 and 50 years.

Deputy Commissioner Girish Dayalan said the seven new patients were from two families, including the panch who has already tested positive and sarpanch of Jawaharpur. The affected members of the two families were involved in distributing community food among poor, needy and labourers and have also been consuming the same food. They are also said to be the contacts of the earlier positive cases.

He said 55 contacts of a positive person at Jagatpura village were traced and their samples were taken.

Dayalan, along with Civil Surgeon, rushed to Jawaharpur to take stock of the situation and sealed the entire village area as a precautionary measure.

The affected members of the two families were involved in distributing community food among poor, needy and labourers and have also been consuming the same food. They are also said to be the contacts of the earlier positive cases.

It is pertinent to mention here that Mohali district saw four Covid-19 positive cases in a day on Monday. Two days after 42-year-old panch of Jawaharpur tested positive for Covid-19, his father (67), brother (38) and wife (43) also tested positive in the reports that came in the afternoon. All of them have been admitted to Gian Sagar Hospital in Banur.

Sources said the panch of the village came in contact of a foreman, who had come from Delhi to meet him on March 31 and said to have attended the Tablighi Jamaat congregation. He stayed in the village for a couple of days before leaving for Delhi.

The panch owns a tent house and has five to six Muslim labourers as employees.

Presently, Mohali has the highest Covid-19 cases in Punjab. Earlier, it was Nawanshahr with 19 cases. Till now, Mohali has reported one death while four patients have been cured.

Dayalan said they were undertaking extensive contact tracing to detect possible coronavirus positive cases, which was clear from the fact that of 2,368 samples taken in Punjab, nearly 600 i.e. 25 per cent were taken by the Mohali administration through contract tracing.

The DC said a total of 118 samples of the further contacts of those found positive had been taken and as per the protocol, 522 houses were checked for symptoms during a survey.

He exhorted people not to panic and stay inside their homes and reiterated that the district administration was well-equipped to tackle the situation.

Australia's lead is now 182 runs and the match is tantalisin...