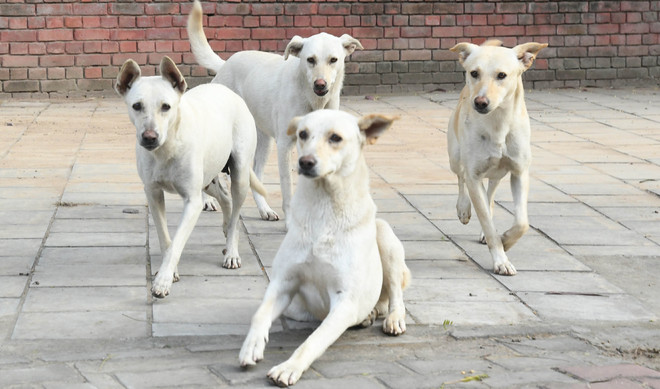 Around 28 dog-bite cases per day on an average were reported in Chandigarh last year. - File photo

Carry stick while going out for walk

It is really shocking to know that the total dog bites during the previous year were as high as 10,558. This is much more even than total dog bite cases in Mumbai. The MC is sterilising dogs. But the results are not favourable. Strays can be kept at canine centre like cows are kept in a gaushala. Individuals may also be advised to carry a stick while going out for morning and evening walks. Never forget that safety saves.

Tie up with NGOs

Shift strays to place outside city

First of all we cannot say how much truth is there in dog sterilisation as no MC employee is seriously performing his/her duty. If the MC had sterilised dogs on regular basis the canine population would have certainly reduced. All dogs should be shifted to one place outside the city and taken care of.

Stray dogs menace has increased manifold not only in Chandigarh, but in the tricity. All stray dogs should be shifted to centres set up by the MC authorities after sterilisation. People should also be educated about not to feed stray dogs.

Rising population of stray dogs in the city indicates that sterilisation undertaken by the Municipal Corporation is shoddy. Questions can be raised over surgical skills of veterinarians. Unless the sterilisation process is not overhauled thoroughly the stray dog population and canine bite cases in the city will continue to rise with each passing day.

There is large population of dogs in every sector of the City Beautiful. This has increased dog bites cases. The sterilisation project has failed as it is difficult to catch every stray dog. Dog lovers should understand the pain of dog bite victims. As such, the UT Administration should mull over culling stray/unlicensed dogs every six months in order to end the canine bite problem and keep their population in check.

From time to time the Municipal Corporation should arrange for catching stray dogs. We often feed stray dogs. It is not bad, but this particular habit is fatal to our society as it increases canine population in the city. So, we must stop feeding dogs.

Act before onset of breeding season

The rise of the canine population and stray-dog bite cases falsify the tall claims made by the Chandigarh Municipal Corporation about the sterilisation drive. Before the onset of the dog breeding season, the MC should initiate dog sterilisation stringently. Stray dogs must be kept under care for sometime after sterilisation and vaccinated against rabies.

It has been observed that the Chandigarh Municipal Corporation staff is not working up to the required expectations. Ultimately, residents are at the receiving end. Top officials have to step in and see that the civic body field staff puts an end stray dog menace. Besides, the civic body has to carry out sterilisation drive at regular intervals.

Catch-and-release is an effective means of reducing stray dog population. It does take money and time. If stray dogs are not killed, their population will keep on increasing and pose danger to humans, especially children. Stray dogs are often carriers of diseases because of lack of care. It is time for individuals to accept personal responsibility in stray dog management. So, only culling can reduce the population of stray dogs.

It is unbelievable that hundreds of dogs are being sterilised every month. The MC should not give wrong data to the public. Male and female dogs must be sterilised. Special training must be given to the MC staff to sterilise dogs. Sterilisation surgery should be done properly. Besides, the MC can construct stray dog shelters in the city.

Put up stray dogs for adoption

The MC should continue with sterilisation of stray canine and can shift them to dog shelters. Other option is to encourage residents to adopt stray dogs. The MC can charge a nominal fee for adoption. This way dogs will get home and the MC can generate revenue.

It's really shocking and disturbing to know or read about dog bites in the City Beautiful. You can't go out for a peaceful morning or evening walk due to fear of getting attacked by street dogs. Stray dogs are nuisance to society. They litter anywhere. Many dog lovers are non-vegetarian. They do not raise any voice against killing of harmless animals. In most other countries, culling of dogs is allowed while in India it is banned. The Municipal Corporation, which is not even competent to supply water to the city, has been assigned the task of stray dog sterilisation. The fault lies in the stray dog policy. It has to be changed to allow systematic culling of stray dogs coupled with sterilisation because canines have immense power to reproduce.

MC not serious about strays

Half-hearted efforts to reduce stray dogs has led to increase in their population in the UT. Also, residents openly feed strays in the city. The authorities should ban feeding stray canine. Many persons keep stray dogs as pets, which are not registered with the MC. Pets bite people. The MC should upload list of registered pets on its website for the knowledge of residents. Dog pounds should be created for strays. A helpline should be launched to report stray dog menace in the city.

Owners should get pets trained

The Municipal Corporation should adopt proper sector-wise strategy to control the stray dog menace in Chandigarh. Camps should be held for residents to make them aware of what needs to be done in case a dog bites. Pet owners should get their dogs trained so that they don't bite people around them. A dedicated 24-hour helpline number should be introduced to deal with canine bite cases. Dispensaries should provide free treatment in stray dog bite cases.

Stray dog problem does not persist only in Chandigarh, but adjoining cities of Mohali and Panchkula are also facing the same issue. As strays can easily move around tricity so the problem cannot be tackled by a single authority. Therefore, menace should be checked by setting up a joint rapid action team with mutual understanding to catch and sterilise stray canine and prevent dog bites in the tricity.

No impact of drive at ground level

Even the Animal Welfare Board of India has also found that all is not well with MC sterilisation drive, which has many anomalies. The canine sterilisation drive has made no impact as their number continues to rise. Strays are common sight in streets and parks of the UT. The MC should consider expert advice to check canine population, involve RWAs to deal with the menace and stop residents from feeding stray dogs. Above all the UT MC should setup dog care and rehabilitation centre.

Dog bite cases are common in Chandigarh. The Municipal Corporation should increase stray dog sterilisation in the UT. The MC can also promote stray dog adoption policy. The MC should tie-up with organisations, which need dogs for security purpose.

Don’t dump waste in the open

The population of stray dogs is increasing in the UT. The Municipal Corporation has miserably failed in tackling dog bites in the city. To stop this, the authorities should make shelters for stray dogs. There should be space for dogs, but they should not be allowed to roam freely. People should be aware about steps to be taken in case a dog tries to bite. Sterilisation and vaccination drives by expert teams must be carried out at regular intervals. Owners of meat shops also dump waste in the open, which attracts stray canine. The MC must clear garbage heaps and close unlicensed meat shops. Animal lovers can help by rounding up strays and keeping them in custody until good homes are found for them.

Most victims are Senior citizens & kids

The claims of Chandigarh MC regarding sterilisation of stray dogs seems to be incorrect. Had the sterilisation been carried out the population of stray dogs would not have increased. Whatever reason it may be, stray dog bite cases are increasing in the UT. Victims are mostly senior citizens and children. The MC should form a stray dog sterilisation teams, which should report the number of dogs sterilised on daily basis. The MC should ensure availability of anti-rabies vaccine in hospitals and dispensaries so that it could be used for the needy.

Despite sterilisation of stray dogs their population is increasing. Proper record of all sterilised stray dogs needs to be maintained. Human life is precious. Yet as civilised society we cannot ignore animal rights. For this the civic authorities should relocate strays to dog pounds set up on the city periphery. Dog adoption can be encouraged to reduce the menace of strays. No feeding of stray dogs should be allowed in the city. People should feed strays at dog pounds only. The MC should implement the policy for the registration of pet dogs, identify strays in all sectors and provide free treatment to dog bite victims across the city.

Canine menace is increasing day by day posing a threat to those, who venture out in streets or go to parks for morning/evening walk. Main reason behind this issue is garbage lying in streets and markets as strays scavenge on it. The need of the hour is sterilisation and vaccination of dogs with the help of the SPCA.

The population of canines is increasing at an alarming pace. The MC is making less effort to check the menace. The civic body should sterilise bitches. Creation of dog pounds can restrict strays from roaming in public places. Residents on their part should not feed dogs at public places.

Dogs have rights while people don’t

The alarming dog menace, growing by the day in the tricity, proves that dogs have rights while people don't. Children and elderly are the worst hit as they are most vulnerable to dog bites. Dog sterilisation drive has not yielded desired results. Periodical culling of strays is the tried and tested remedy. Toddlers should never be left alone with a dog around, even if it is a pet. It's always better to be safe rather than sorry.

Stray dogs can bite anytime, anywhere and anybody can be the victim. Besides, stray dogs create nuisance by littering/defecation in public places and cause serious accidents. According to the WHO reports human deaths by rabies are the highest in India. The situation being highly alarming needs immediate attention. But even after receiving directions from the High Court, the Chandigarh Municipal Corporation has virtually failed to effectively check stray dogs. Sterilisation has proved impractical and expensive. Thus, other countries go for elimination not sterilisation to prevent stray dog problems. Besides, there are clear guidelines of the Supreme Court about euthanising dog, which must be observed meticulously.

The Covid-19 vaccine hesitancy in Chandigarh is over 60 per cent. What is the reason for such high indecisiveness?