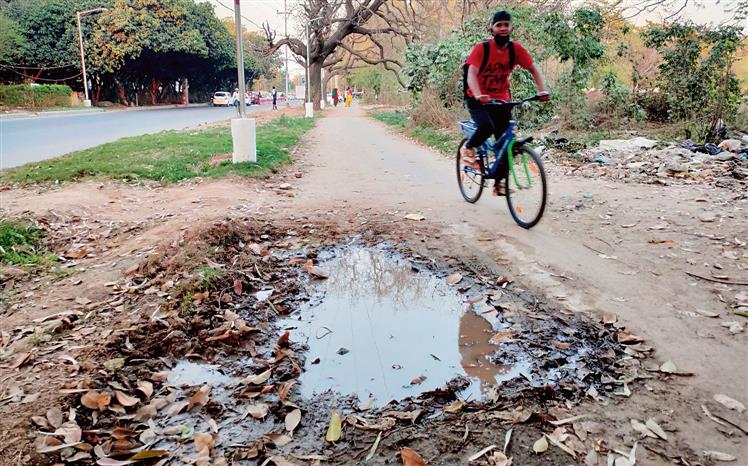 A damaged portion of a cycle track in Sector 38-A, Chandigarh. Tribune Photo: Pradeep Tewari

To provide a seamless ride, the UT Engineering Department has started repair work on cycle tracks in the city.

To encourage non-motorised mode of transport, the UT Administration has laid 210-km-long dedicated tracks for cycling in the city.

However, damaged tracks have put a brake on the popularity of pedalling, which has dual benefits of improving health and air quality.

Cycling enthusiasts say they face obstacles such as damaged track and uneven surfaces, which break the rhythm.

Sometimes, it is dangerous to cycle on these tracks due to uneven surface, accumulation of rainwater and abrupt turns. —Surender Singh, Sec 21 resident

A regular user of cycle tracks, Surender Singh, a resident of Sector 21, said it wasn’t a smooth ride at all on cycle tracks. “Sometimes, it is dangerous to cycle on these tracks due to uneven surface, accumulation of rainwater and abrupt turns,” he said, adding that the ride was regularly hampered at inter-sections too.

A separate track for cyclists was a good initiative of the UT Administration, but it should be maintained regularly, said Aman Verma, a resident of Sector 7. He said the authorities should also ensure amenities such as cycle stands and water points at regular intervals. UT Chief Engineer CB Ojha said patch work on cycle tracks had already been started, while the recarpeting work of damaged stretches would begin in the first week on March. He said a total of 12 km would be covered under recarpeting work in different areas of the city. After the lockdown, residents have started opting for cycling to maintain fitness. To encourage cycling in the city, the Administration has spent nearly Rs22 crore in the past five years on developing infrastructure.

Cycle tracks to come up in Industrial Area, Dhanas