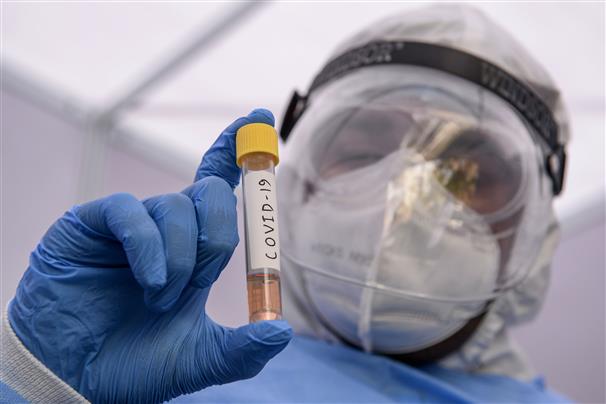 It was on October 6 last year when the recovery rate had just crossed over 90 per cent. It then stood at 90.15 per cent with only 525 active cases of the total 6,318 cases recorded till that date.

As many as 2,603 eligible persons were administered the Covid vaccine at 32 centres in the district on Saturday. State Election Commissioner Dhanpat Singh was among those who received the first jab. Over 90,000 doses of the vaccine have been administered in the district so far.

Chandigarh: The city recorded 398 Covid-19 cases on Saturday, taking the number of active cases to 3,265. With three more deaths, the toll has reached 396. The total number of cases in the UT has reached 30,341. As many as 343 more city residents have recovered from the disease. TNS

Mohali: Four more fatalities were witnessed in the district during the past 24 hours, taking the toll to 473. Besides, 536 fresh cases surfaced till Saturday evening, taking the case tally to 31,140. As many as 166 patients have been cured of the disease. Among the fresh cases, 266 came from Mohali (urban), two from Lalru, 10 from Kurali, 11 each from Boothgarh and Banur, 23 from Dera Bassi, 29 from Gharuan, 86 from Kharar and 98 from the Dhakoli area of Zirakpur. TNS 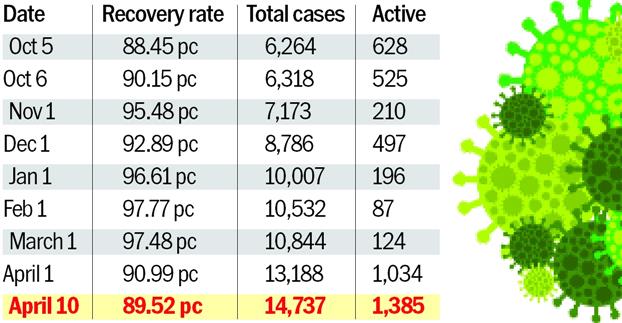 From December 1 to January 1, only 1,221 fresh Covid cases were reported. It led to improvement of the rate to 96.61 per cent. February and March saw only 850 cases. Lesser number of infections compared to recoveries during this period further improved the recovery rate. On March 1, the recovery rate stood at 97.48 per cent.

Chief Medical Officer Dr Jasjeet Kaur said: “The district is adding more and more cases every day. So, a dip in the recovery rate was expected. The number of patients being discharged from isolation is less as compared to new infections.”